Satisfyer is a brand that produces sex toys on air pressure. They have often been accused (also by me) that they are just a cheap rip off of the Womanizer. After all, Womanizer is the inventor of the air pressure technology, that gives you the feeling like someone is sucking on your clit. But Womanizers are expensive and that makes the Satisfyer models an affordable alternative for many. Now, there’s something strange going on in sex toy land. Womanizer, so aften being copied by Satisfyer (and many others), now launched a model that looks suspiciously like one of Satisfyer’s models. Who is the copy cat now? 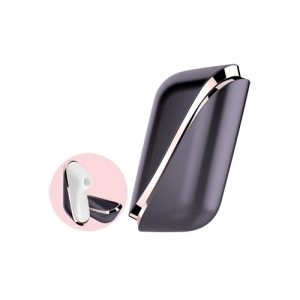 Earlier this year, I wrote a review about the Satisfyer Pro Traveler. It is a small compact device that goes in your handbag easily and has a characteristic hood which makes it very discrete.

The Satisfyer has 11 positions that can be operated with two buttons (+ en -). Further more, the Satisfyer Pro Traveler has a nice price (€39.95).

I was (and still am) pretty impressed by this Satisfyer model. They have some other models that I really wouldn’t recommend, but this one is actually quite nice. It’s just that they are known as a company that copies technology and design (mostly from Womanizer), which makes them a lot less likable. That’s why this Traveler is kinda unique, because it shows that they can be innovative. That is unless they are damn good spies and a lot faster with their go-to-market? See what they did? They stole so often that I just can’t trust them and start to think bad thoughts. 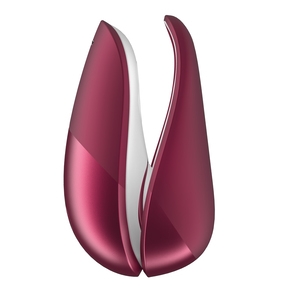 Because, imagine my surprise. Six months later, Womanizer launched a product that looks a lot like the Satisfyer Pro Traveler. It is a smaller version of a Womanizer in a discrete size. Earlier, Womanizer tried a smaller and discrete model with the Womanizer 2Go, but that was just an awful mistake, if you ask me.

The Womanizer Liberty also has a magnetic cover, just like the Satisfyer Pro Traveler, that makes the toy – and especially the little mouth – protected hygienically.

The Liberty has 6 air pressure positions that can be operated with two buttons (+ and -). The soft silicone mouth is removable and can be exchanged with a larger Womanizer XL hood. Further more, the Womanizer Liberty is also waterproof, so you can use it in your bathtub and it also makes it easy to clean.

The Womanizer does have a better design. It is obvious by the packaging. It’s just more luxurious and feels like a present.The Womanizer Liberty comes in different colors: wine red, purple, light blue, and pink. Every color has its own style, which shows on the packaging. The price is a lot higher than the Satisfyer: €99,-. But, you do get the real deal and compared to other Womanizers this is a great price!

Now, you could also compare the Womanizer Liberty to their other smaller model: the Starlet, but that would not be fair to the Liberty. The Starlet only has one controle button and only has 4 positions (of which the lowest one is already pretty intense).

For both the Womanizer Liberty as the Satisfyer Pro Traveler it applies that they are easy to carry around, but there might be a small disadvantage to that. You see, personally I like my toys to be a bit bigger, because it makes them just a bit nicer to handle. Which design is better, is a personal choice, so I leave that up to you.

Price-wise, the Satisfyer wins hands down, obviously. But if you, like me, rather drive a Mercedes in stead of a Hyundai, the Liberty is an affordable choice. The Starlet may also be cheap and small, but has less positions and only one control button.

The Womanizer is easier to clean, because the mouth is interchangeable. When you are particular about hygene, the Womanizer wins from the start. On top of that, the Liberty comes with two different size mouths, so there is always one that fits the size of your clitoris.

In short, if you are willing to pay an extra €60, I would most certainly go for the Womanizer Liberty. But if you are on a budget and are still looking for a small and discrete sex toy on air pressure, the Satisfyer is a reasonable  alternative.

Volg me
Jennifer
Old enough to know better, young enough to give a damn.

Womanizer launches a smaller and cheaper alternative: The Starlet

The 5 most popular sex toys of november 2017