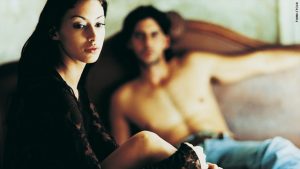 Several studies show that women regret casual sex more than men. Of course men can have regrets too, but more often they regret missing opportunities of getting some. Question is, why is that?

If you ask people what they regret in their lives, their answers are often about relationships, love and sex. Think about lost opportunities, cheating, or the way someone has lost their virginity. Men and women have a different approach towards relationships and sex. According to a study of evolution psychologists that has to do with different responsibilities when producing children. Evolutionary,  women have a higher need for a reliable man that is prepared to commit for a longer period, so they’ll be around when the children grow up. Men would, according to this theory, be more interested in creating as many offspring with as many (young) women as possible. In short, women are looking for commitment, and men for casual sex.

According to this theory, it is more than logical that women regret casual sex more, and men regret missed opportunities for having sex. Different studies show that this proposition is correct. In one of those studies, respondents were asked what it was they regretted. Women pointed out they regretted things like ‘losing their virginity to the wrong person’, ‘being unfaithful’, or ‘getting in bed with someone too quickly’. Men on the other hand, regretted things like ‘not having said to someone they were beautiful’, not being sexual adventurous at a younger age’, or ‘not being adventurous when they were singe’. This also appeared to be true when the study was extended among lesbian and gay persons.

Still, it is the question if this is all due to evolution. Perhaps there are other, sociological and cultural causes. Perhaps women experience social pressure that it is ‘wrong’ to have casual sex? If women regret casual sex more and men regret missed opportunities more, women may be more likely to think about the social consequences of their actions.

The consequences as a cause

A new study among hundreds of adults from Norway and de USA, shows again that women regret actions and men regret inactions. This survey however, went deeper into the factors that played a role in having regrets after casual sex. Both men and women experience regret in the same way: disgust, lack of pleasure, and concerns about the consequences (e.g. health issues, such as STDs, or unwanted pregnancies).

If the experience of regret is the same, then how come women regret casual sex more often? That is, so the research suggests, because women more often experience these factors more often than men. For women casual sex is more often not satisfying. Therefor, they might feel used (disgust) and they are more concerned about unwanted pregnancies.

The research also showed that there is a correlation with the person who had initiated the casual sex. It appeared that if the women hadn’t initiated it herself, the chances are bigger that she regretted it., then when they had initiated it themselves. For men, it didn’t matter who took the initiative.

Results of the big NBRplaza Oral Sex Survey: Men and women don’t think alike when it comes to oral sex