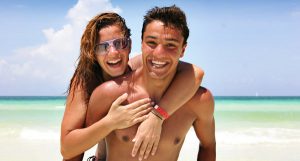 Some animals only fuck during the mating season. They do it only a few times a year, when the female has her fertile period. We humans are, what scientists call “continuous breeders“. By this they mean that humans mate all year round. But is that really the case? Because people have sex much more often in the summer than in other parts of the year.

In search for sex

Several scientific studies show it: people are much more sexually active in the summer months than in other parts of the year (December excepted). This is shown, for example, by our search behavior on Google, which were published in Archives of Sexual Behavior. For example, certain search terms show that we search for porn, prostitution and online dating more often in the summer than in the spring and fall. You might think that people might be more active on the Internet in the summer, but that is not the case. For example, searches for pets, car parts and popular websites do not appear to have such a seasonal pattern. Only search terms related to sex, follow this particular pattern.

Why do we have more sex in the summer?

What’s behind our increased sexual activity in the summer? It appears to be due to three factors: biological, psychological and social/environmental.

In summer, the days are longer and we are exposed to the sun more and longer. As a result, the body makes more of the neurotransmitter serotonin in the summer. This is a substance in our brain that makes us feel good. Anti-depressants, for example, are often designed to produce this very substance. It also explains why more people feel depressed in the winter. Because people feel happier in the summer, as a result of changes in our brains, they are more “in” for a good fight.

But in addition to this biological aspect, there are also psychological aspects that play a role. In the summer we do more fun and exciting things. We go on vacation, to an amusement park with roller coasters, or to a festival or event. That excitement and thrill excites us. And that excitement is often translated by people into sexual arousal (it’s called excitation transfer theory). During a study in 2003, amusement park visitors who had just been on a roller coaster or who were still in line were asked to look at a picture of someone of the opposite sex. People who got off the roller coaster found the people in the photo more attractive than people who were still in line. This form of transference could explain why in the summer – when we do more exciting things – we also feel more like having sex.

The third factor is the social environment. During summer, there are more sexual stimuli. For example, in summer we wear fewer clothes (shorts, skirts, bare navels, short sleeves, bikinis and swim trunks). These are unconscious sexual stimuli no matter where you look. We also have more free time in the summer. Teens are free from school and while their parents have to work they have more time without parental supervision. And adults often take time off from work during the summer to escape the stress of everyday life. Stress, which keeps them from having sex in other parts of the year.

So, should you be hornier lately than you were a few months ago, that may be true.

Men that have sex more often, have a lower risk of cardio vascular diseases

People with an eye for detail have better sex lives

Autonomous vehicles are the future for sex workers