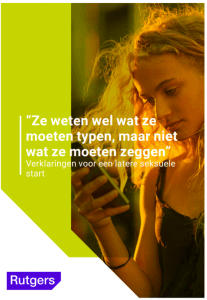 Last year, Dutch center for sexual health and rights Rutgers, concluded that young people start having sex at a later age. A qualitative follow up research by Rutgers now shows why. Especially social media play an important role, but also the increase at which Dutch youngsters can buy alcohol is of importance. Furthermore, young people value the way they lose their virginity.

Rutger’s research ‘Sex below 25’ showed that young people start with kissing and having sex a year later than five years ago. To find an explanation for this shift, that is also seen internationally, they spoke to 47 boys and girls in the age 16 to 25 years old.

from these conversations it appeared that social media have largely replaced the offline world. They use social media to have contacts with each other and to assert themselves: show how beautiful, sexy and popular they are. Dating apps and social media like Facebook and Instagram make it easier to flirt and to find out how popular you are. There are no awkward silences and less risk of rejection.

The threshold to actually go to someone in person is big. ‘Through a screen you can say things with emoji’s, but when things get real, I suppose it can be awkward for some and they just don’t know what to say’. Let alone how to behave when you want to have sex.

The respondents in the research say they experience a lot of pressure from parents and society. The emphasis is on being ready and making your own choices. Insecurity and anxiety to fail slow inhibit experimenting with sex. And the norm is the first time should be with someone special, someone who they are seeing. You have to be one hundred percent sure, you have to choose for it, and you really only should do it with someone very special. This sets the bar pretty high.

Experimenting is not something you do with just anybody, according to the respondents. Although social media make it easier to get into contact with others, these social media also make it much more transparent what you do. Girls especially are afraid they get ‘exposed’, that images or information will become available online. That makes them extra careful. Boys and girls are still not equal. When a girl has had sex with four boys she is called a slut or a whore, while boys with the same ‘score’ are kind of a hero.

The role of increasing the age limit for alcohol

Young people often start kissing and experimenting when they start to go out. But due to the shift in the legal age from 16 to 18 at which Dutch youngsters can buy alcohol, they start to go out at a later age. For young people with a lower education this is less of a problem; they say they have ways to get their hands on alcohol and they throw parties where there is lots of kissing.

Is this a bad thing?

Rutgers say in their Dutch press release that there are some advantages to this development. The shift from ‘normal’ contact to online contact means that part of their sexual development can and will just happen there. Flirting and trying to interest others can be done online. And persons who are less in touch with their peers, or do not meet heterosexual norms, can make contact online much easier.

But the research also shows the less pleasant sides of the online world: The fear for exposure, the pressure to assert oneself, and to be perfect, insecurity because of constant comparison to others, and as a result a huge threshold to actually meet someone in person. According to Rutgers, the phase of awkward silences, the bumbling around with kissing and the first time seeing someone, is so important, because this way people learn how relationships work and what their role in it can be. It makes them get realistic expectations and can built self assurance for later relationships.

This proces now shifts a year and that could lead to problems if they do not learn to speak the language and build the self assurance to have sexual relationships.

Rutgers: The Dutch are satisfied with the quality of their sex life