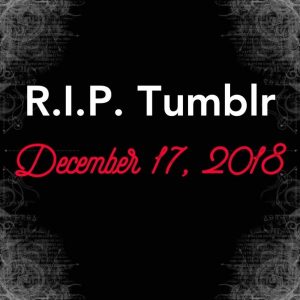 All photos, videos and animated GIFs that contain genitalia, female nipples and sexual acts (including illustrations) will be banned from Tumblr. The exceptions are classical statues and political protests.Erotica exclusively containing text will be allowed. Also, works of art with nudity ia allowed, as long as it doesn’t depict sexual acts. Breast feeding and pictures of child birth are also OK.

After 17th December, all explicit pictures will be marked, based on some algorithm. The user will be notified by mail, and the picture will be put on ‘private’. This will prevent the picture from being reblogged. The user may lodge an appeal when he thinks an error is made.

Tumblr’s CEO, Jeff D’Onofrio, said that as Tumblr continues to grow and evolve, they have a responsibility to consider that impact across different age groups, demographics, cultures, and mindsets. “We considered the pros and cons and we came to the conclusion that we want to be a spot where everybody feels safe to express their opinion”, he said. “It comes down to that there are no shortage of sites on the internet that feature adult content,” Tumblr said. “We will leave it to them and focus our efforts on creating the most welcoming environment possible for our community.”

Our motto is: if you feel committed to your content, start a self-hosted weblog.

Self-hosted means that you have your own domain and you use a hosting party to run the software and content of your blog. You will pay them for the space and traffic. It means that you don’t use a (free) platform like Tumblr, Blogger or WordPress.com, but you have control over your own site. Your own space on the internet, where you have a say over almost everything you do. That offers you security and continuity.

That may sound difficult, but – believe me – it isn’t. Even without any technical knowledge, you can create your own site or blog.