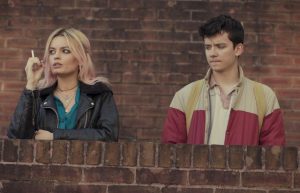 The awkward high school student Otis does not have much experience when it comes to love, but he get’s plenty of baggage from his mother and sex therapist Jean. Their house is filled with images, books and videos about sex, which makes Otis feel like an expert in the field his classmates want to know so much about. Together with his friend Maeve he starts underground therapy sessions to classmates. But that only makes him realize that he could use some help for himself.

In the Netflix series ‘Sex Education’ we see Gillian Anderson (X-Files, The Fall) as single mother, that has some liberal ideas as a sex and relation therapist when it comes to sex. In fact, some of these ideas seem shocking and traumatic for the young Otis.

The story is very refreshing in the way it makes sex open for discussion. It shows that it is OK when you have questions about sex and you don’t have to be very good at it from the very start. Although the characters are pretty stereo typed, they are still very identifiable. The language is also very realistic for teenagers. All this gives the series a very realistic feel to it.

But even the adults don’t always know how to handle things. THey too have their vulnerabilities and insecurities. This makes Sex Education a series about friendship, relationships and … sex.

Sex Education is a must watch

The special thing about the series is that even though it taks place in the present, the clothing and soundtrack originates from the 80s. This gives the series just about enough escapism from reality. The young characters are all in the midst of their transition to adulthood, presenting us with some funny, sweet, endearing, touching and sometimes sad moments. But as a whole, Sex Education is a series that discusses sex in a light way for both the young and the adult. I can’t wait for the second season.