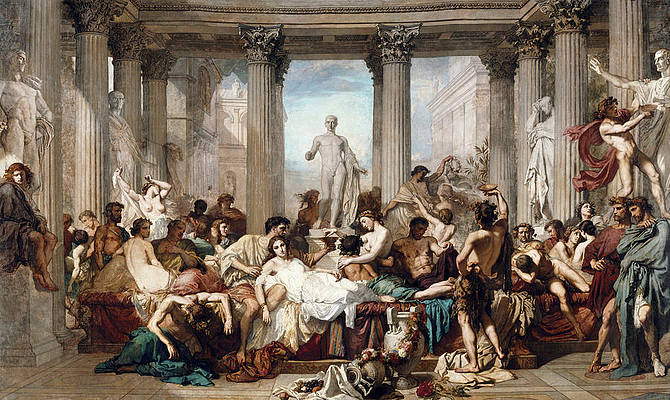 The ancient Greeks and Romans

The Romans were not exactly restrained in their god worship either, as in worshipping Saturn, lord of death, and Bacchus, god of wine. The secret private imperial feasts were accompanied by sexual excesses and perversions. Gross violence was not shunned either. Anyone who has seen the movie Caligula, about the third emperor Gaius Julius Caesar Germanicus, knows how the infamous emperor celebrated. He even had three gigantic orgy ships at the beginning of the first century, where he hosted sex parties and committed the occasional murder. Yet historians are not entirely in agreement about the accuracy of the descriptions that have been found. Some “evidence,” for example by the historian Titus Livius, is rather dismissed as sensationalist reading.

The rise of Christianity

It is known that Marquis de Sade organized perverse parties in France at his castle in the town of La Coste. He and his wife surrounded themselves with young male and female servants and subjected them to violent sex, cruelty and coprophagia, as described in his book “The 120 Days of Sodom. His sexual excesses even led to the word sadism being derived from his name.

There are also clubs that organize sex parties. Often such clubs have a door policy, so that, for example, single men can be barred. Unfortunately, these kinds of parties are often for members only, which in practice means that you have to pay a lot of money for an entrance ticket. Sometimes there are also age requirements (which can be useful, depending on what you are looking for).

Dig into the rules of the party. What is the dress code, what are the rules about the different rooms (where can you have sex and where not), is there a particular theme?