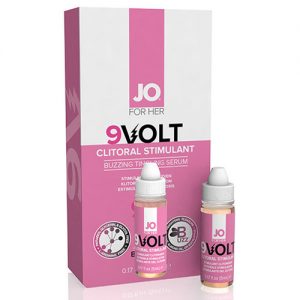 It might seem a little weird, that a man is writing a review on a clitoris serum. Please allow me to explain. I tried the System Jo 9V together with my partner (who in fact is the proud owner of a clitoris*). EasyToys was zo kind to provide us with a flask. You see, this is the case: My partner and I, we like to experiment, especially with ‘ointments’. We often use lubes with cooling or warming additives and have been looking for something with a little more ‘oomph’ for some time. System Jo 9V promises to be something like a vibrator in a bottle, so we’d like to try it out.

* I try to be as gender neutral as possible in my review. System Jo recommends this product to women, but it is in fact fit for everybody with a vulva, and probably also for persons with a sensitive penis too.

There are a number of reasons why you should try a clitoris gel. First of all, it appeared from a sex research among Dutch and Belgian men and women that there is an orgasm gap. Man have orgasms twice as often as women.  Half of all men believes that penetration alone (penis-in-vagina sex) is sufficient to make her orgasm. But half of all women hardly ever reaches an orgasm. For 6 in 10 women (extra) stimulation of the clitoris is essential to orgasm (during fucking). A clitoris gel like System Jo 9V ensures extra stimulation of the clitoris, which makes it a lot easier for the owner of said clitoris to get an orgasm.

But even for women that have little or no difficulties in reaching an orgasm, a clitoris gel is recommendable. It ensures extra stimulation. As a result, you will get aroused easier and longer. The clitoris will become extra sensitive and it ensures a ‘buzzing’ pleasure, and gives a tingling and warming sensation.

We have noticed that some ‘normal’ lubes with a warming effect are sometimes a little ‘flat’. There is some effect, but it disappears quickly. My partner likes it when we stimulate her clitoris just that little extra. We do this for example with ice cubes (make sure you wet it to avoid stickiness), but also with menthol creme and other stimulating stuff, that is actually not meant for this purpose. That’s why a simulating gel that is actually developed specially for this kind of use has our preference.

System Jo 9V Clitoris Serum is packed in a neutral looking white and pink box. When you open the box, you will be (mistakenly) struck by a sense of disappointment. There is just a tiny bottle (only 5 ml) inside. Is that all? Yet, this is not much of an issue. You must consider that you’ll need just 2 or 3 drops. That means that even with this small bottle, it will last for a couple of dozen times.

All variants of System Jo Clitoris Serum are free of parabens glycerine, glycol, and L-arginne. They all contain natural ingredients, but they do differ per variant. The 9V variant contains:

In short, System Jo has managed to bundle a whole lot of natural ingredients in this tiny bottle. It is a stimulating – perhaps even soothing – oil based gel, fit for women with a sensitive skin (that are looking for additional stimulation).

The scent of the oil is very light, but if you sniff really good, you might smell a hint of basil. It also reminds me of a massage oil I sometimes use that contains hedera extracts. The taste is a bit olive oil-like with a spicy note. Not dirty or unpleasant, but a bit tingling on the tongue. This might seem insignificant, but as the partner of the person that has the clitoris, I can tell you that it plays an important role in the oral love making that might take place.

Because this is an oil based gel, it is not recommended to use together with a condom. Although you will only use a few drops, it might affect the latex and increase the risk of rupture. If you are as big of a screw up like I am, it will eave some stains in your sheets, but nothing a washing machine can’t handle.

I carefully applied two to three drops on and around the clitoris of my partner. This is the part where I have to rely on her judgement:

As the partner I can only say that it is great to notice that the libido of your significant other is boosted. Not only did she reach her orgasm faster, but it was also more intense and more often. Although she believed that the feeling had worn off after about ten minutes, I was under the impression that she just had gotten used to the sensation, but it did in fact have an effect for at least half an hour (judging by her craving for sex).

I did in fact try a few drops on my glans, by the way, just to see what the effect was .And I must say I hardly felt a thing. Now, this doesn’t surprise me at all, because other warming lubes don’t do much for me. I did feel a slight glow. The oil-like texture did feel nice though.

We already tried Durex Orgasm Intens, once, but System Jo 9V is just that bit more intense that we were looking for.

System Jo 9V goes just that one step further beyond normal lubes with a warming effect. If you, or the both of you, are looking for a stimulating gel, that enhances the libido and intensifies her pleasure, I can recommend System Jo 9V . If however, the description above scares the hell out of you, you should of course walk away from it.

System JO 9V is a body safe product, with a long lasting effect.

System Jo 9V is available no longer for sale. In stead, it has been replaced with System Jo Atomic.