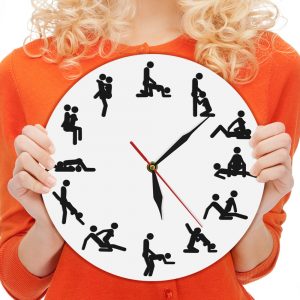 How long do you have sex on average? And how long would you like it to last? Research shows that there is a big difference between the desire and reality.

From a quarter to half an hour?

In the same research, the respondents were asked how long they wished that sex would last. Now the women indicate that they liked intercourse to last for about 14 minutes, while foreplay should last about 19 minutes. Men would like both foreplay as intercourse to last about 18 minutes each. That would mean that ideally sex would last for about 33 to 36 minutes on average, in stead of 18 to 21 minutes that we actually spend on it.

But is that really the case?

Going by this research, you might think that people would like sex to last twice as long as it is actually the case. Both men and women said so and it goes for both foreplay as intercourse.

The research was only conducted among heterosexual couples, so we don’t know if sexuality plays a role. Also it is not clear whether there are differences between age categories or cultural backgrounds.

But what is even more important, is the question if people would truly be more happier and satisfied if sex would actually last twice as long? Do people just say this because it is socially desirable? There has not been any research if people would actually become more happy when they try to have longer sex. And it is questionable if the effect is preferable.

Another research shows that if people force themselves to have sex twice as often as they now do, they will see sex as a chore. And that makes seks a lot less satisfying. The same thing could happen when people will try to force themselves (and their partner) to make sex lasts twice as long. Perhaps it doesn’t feel that good anyhow.

Quality of sex is generally more important than quantity. Don’t keep time, but rather focus on how much fun your partner is having. On the other side: If you would like sex to last longer and so does your partner, let nothing stand in your way to try to make it last longer.

What makes a man a good lover?

Why teenagers have sex at a later age