Little Red Riding Hood, Rapunzel, Hansel & Gretel, the Little Mermaid, Snow White, Cinderella; who is not raised with the fairy tales of the Brothers Grimm? But did you know that the original stories were filled with the most horrific elements, making the #metoo discussion look pale? 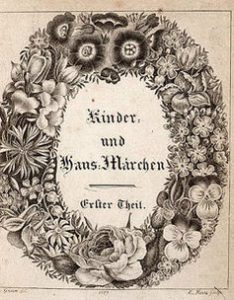 These well-known fairy tales have a very long history. Most of the stories existed long before the Brothers Grimm began to write them down. Initially this was not meant as entertainment for children, but as a scientific document into fables and fairy tales. They did that for the first time in 1812. But the first printing, and also the second rewritten edition in 1815, were not very successful. They remained, however, rewrite and planing, until their 7th child-friendly version in 1857.

The first edition was still full of sex, incest, bestiality, murder, and other things that we would describe as taboo now. Not only the Brothers Grimm have adapted these stories to their time. The fairy tales keep being adjusted. And that still happens. Female characters, which in the original were passive victims, have become strong heroines in contemporary versions. And because of changing legislation and morality, bestiality and incest has disappeared. Some find that to be more educational, while others believe that our children now grow up in a too protective environment.

The role of fairy tales in their time was just to warn kids against the dangers of society. The more gruesome and filled with metaphors the story was told, the better the moral sticked. As long as the stories were not yet on scripture, the Church had no grip on them. And because the stories passed by word of mouth, they became richer and more gruesome. The puritan Disney has also played a major role in the censorship of fairy tales as we know them today. Not only for Grimm fairy tales, but also of those of La Fontaine, Hans Christian Andersen and Perrault. The original moral has given way to sweet stories, without moral and educational value.

Let’s see how the fairy tales are adjusted over the centuries.

There is also a version in which the wolf and makes a sausage of little Red Riding Hood’s grandmother, and forces her to eat it. She drinks ‘wine’ made of grandmother’s blood. 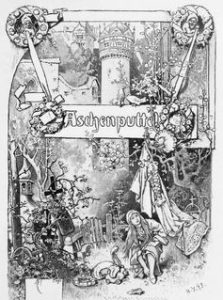 Current version: A beautiful girl becomes the foot stool of her stepmother and her jealous stepsisters. All young girls are invited to a ball on the palace and a good fairy brings Cinderella a dress. The Prince falls in love with her at the ball. If Cinderella hastily leaves the Palace, she loses the slipper. The Prince finds her and the slipper fits. The Prince and Cinderella marry.

Original: The stepmother encourages her daughters to chop off their toes and heels so the slipper will fit them. The Prince sees the bloody stumps and know that they try to swindle him. Pigeons peck their eyes out. They are maimed for their falsehood and lies. 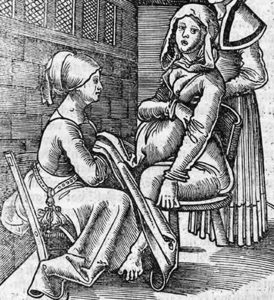 Current version: The witch holds Rapunzel in the tower. To be able to visit her, she must climb up the long hair of Rapunzel. The Prince finds Rapunzel and visits her in the tower to free her. The witch pushes the Prince of the tower and he falls among thorns. Fortunately, Rapunzel rescues the Prince and her tears makes him get his sight back. They get married and live happily ever after.

Original: The mother of Rapunzel is pregnant and sends her husband out to steal herbs from the garden at the tower. The witch discovers the theft and claims the child as punishment. The Prince pretends to be the witch so that Rapunzel lets her hair down. He climbs up to rape Rapunzel. He comes back more often and Rapunzel and the Prince life for a long time in the tower. They often have sex (in the original is this graphically described) and she becomes pregnant. The witch discovers that Rapunzel is pregnant and sends her into the wilderness, where she gives birth to twins. The Prince is so sad that his ‘ friend with benefits ‘ is gone, that he throws himself is of the tower. His suicide attempt failed and he becomes blind. The blind Prince roams the country. Eventually they find each other. Rapunzel marries her rapist and they go to the Palace (where they thought the Prince was dead for years).

Current version: The wicked stepmother forces her man to leave Hansel and Gretel in the forest. They are captured and imprisoned by a witch. The children outwit the half-blind witch, and manage to escape and to return home.

Original: It’s not a stepmother, but their own mother who leaves behind Hansel and Gretel in the forest. The original fairy tale dates back to the 14th century and tells a much more nuanced story about poverty and hunger. A poor woodcutter and his wife feel forced to abandon their two beloved children, otherwise they will die of hunger, or they feel compelled to eat their own children. In the original version the mother is more desperate and more humane. There are several variations of this story (among other Charlie and the Beanstalk). Sometimes there are not two, but even seven children. The Brothers Grimm have replaced the mother in 1840 by a stepmother. 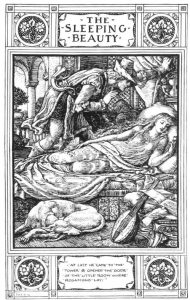 Current version: The King and Queen give a big party for their newborn daughter. But one of the fairies is not invited. In revenge she speaks a curse: the little Princess will, when she is a young woman, poke at a spinning wheel and die. One of the other fairies weakens the curse off to a deep sleep of 100 years. As predicted Sleeping Beauty pricks herself in her finger and she falls, just like all the people and animals in the castle, asleep. The castle is overgrown by a thorn bushes. After 100 years a Prince stirs Sleeping Beauty with a kiss.

Original: In the first version of the Brothers Grimm (1857), different Princes try to conquer the thorn bushes, but they all get caught and die a horrible death. In the older versions from 1630 is stepping up worse. In that story the girl pricks a flax splinter and falls like a log. The Sleeping Beauty is found by a King, who takes her in her sleep and rapes her. The girl gets pregnant and gives birth to twins (while still asleep). As one of the babies mistakes Sleeping Beauty’s finger for a nipple, she sucks out the splinter and awakens her. The wife of the King discovers that her husband has been unfaithful and orders her cook to kill the twins and prepare them to be served to the King. She orders to light a fire on the courtyard for Sleeping Beauty to be burned. The King, however, intervened and throws the Queen in the fire. The rapist and his victim get married and live a dubious life. 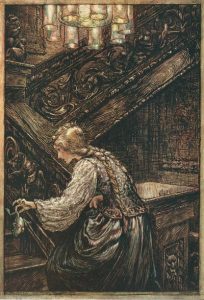 Current version: The Princess leaves a frog to sleep in her bed for  three nights, out of gratitude that he rescued her golden ball from a deep pond. The third morning she wakes up next to a handsome Prince – it turns out that the frog was an enchanted King’s son. In the Walt Disney version the frog changes in a Prince after a kiss from the Princess.

Original: The frog was not at all such a sweet little animal. He scolded the Princess. As the Princess loses her ball during a game, he sees his chance to blackmail the child. He will only get her ball if he can sleep in bed with her (read: have sex with her). The Princess agrees, but if the frog brings the ball to her, she flings him against the wall and calls “so, now you’ll be quiet, horrid frog.” If the frog falls to the ground, he changes into a handsome Prince. He takes her blunt behavior for granted, but the Princess continues to hate the Prince for his behavior. The Prince spread all kinds of rumors about her and embitters.

Current version: The Queen dies at Snow White’s birth, after which the King remarried. The new Queen becomes jealous as Snow White grows into a beautiful young woman and recommends a hunter to kill her stepdaughter. The hunter saves Snow White, after which seven dwarfs take her under their wing. As the Queen discovers that the Princess is still alive, she gives the girl a poisonous Apple. The dwarves lay the Princess in a glass coffin. A Prince comes along the coffin, falls in love with Snow White, kisses her, and the spell is broken.

Original: The real mother of snow white wants to kill her because her Magic Mirror says that not she, but Snow White is the fairest of them all. The mother is forcing a hunter to kill her daughter and bring her lungs and her liver as proof she died and so they can eat them. Later on, on Snow White’s wedding, the Queen gets a few glowing iron mules in which she has to walk around until she drops dead.

There are also rumors that Snow White didn’t just live with the seven dwarves. As she lays in their beds, you can imagine what kind of group sex or gangbang the storytellers were hinting about, as one had her head in his bed, the other her beautiful breasts, one had her belly (ahuh), and so on …( Now think why one was so grumpy!). But this is actually not the case. The story was based on Elizabeth Bathory (a countess) and the seven dwarves may have referred to the men who bricked Elizabeth up in her tower. They may even have been relatives of Elizabeth and her daughter. 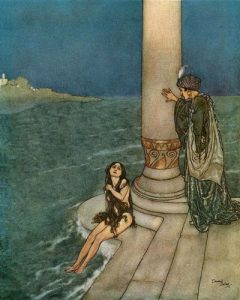 Current version: The mermaid would like to be among men. She is in love with the Prince, who she sings to regularly. The witch gives her legs, but in return she has to surrender her voice. The Prince doesn’t recognize her at first, but all will be well and they live happily ever after.

Original: The setting corresponds to the fairy tale as we know of the filming of Walt Disney. However, the mermaid is tormented by eight oysters that will most likely have bitten her tail. The Sisters of the Mermaid lure seafarers as a hobby and have them drown. The reason for the mermaid to become human is because even though mermaids become 300 years old, they don’t have a soul. For people there is an afterlife. The Mermaid also want a soul. The witch takes not only her voice, but with every step she will feel like knives are stabbing in her feet. If the mermaid does not manage to get married, she will die. The Prince let the mute girl sleep at the foot of his bed. He doesn’t marries her, but let her dance on his wedding. As a result, she not only feels the knives in her feet, but she also knows that she will die, because she will not get married. But her sisters come to the rescue. They have their hair exchanged for a knife. When they get there they kill the  Prince with it. But in order to get her soul, the mermaid has to do 300 years of good.