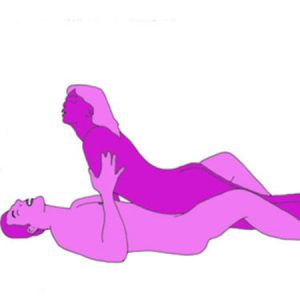 Yet the reverse missionary position – or inverted missionary – is different from other positions where the woman is on top. Because a video always says more than 1,000 words, Natty Mellow and Nacho Vidal do a quick demonstration:

How to in four easy steps

To do the reverse missionary position, follow these four steps:

The pros and cons of the reverse missionary position

There are many advantages to this position. First, this is a position where the woman is on top. Because in many cases the woman is lighter than the man, it is less stressful for her in that case. Also, you can easily alternate this position with other positions where she is on top, such as cowgirl.

But the biggest advantage of this position is that she closes her legs, creating more friction for both him and her. She clamps his penis between her thighs, as it were, which is extra pleasurable for him. But it also provides benefits for her. In this position, the woman’s clitoris is extra stimulated because she can tilt her pelvis so that the penis slides past it.

This position only works if the man is not too small-breasted and if there are no major physical differences between the man and the woman. But even if penetration is difficult, due to these differences, it can still be pleasurable because the penis will slide past the labia and clitoris.

In short, this is a position that is definitely worth trying for everyone. It is intimate and the role reversal can be especially interesting for men and women who want to get into each other’s skin every now and then.