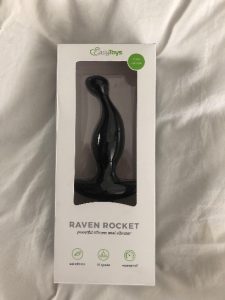 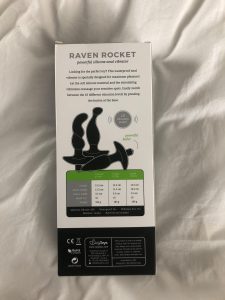 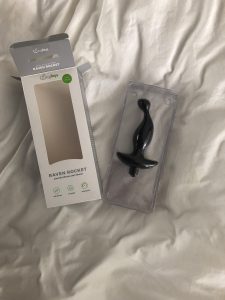 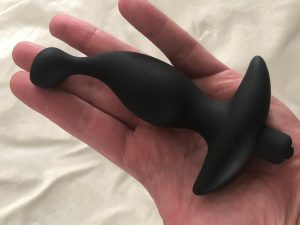 The Raven Rocket is made of silicone that feels nice and soft en has a pretty and seamless finish. An absolute plus – even before I’ve used it – is that it is fully waterproof. I find that an important quality for any sex toy, because it means you not only can take it with you under the shower or in bath, but it also makes it easy to clean under running water. An excellent starting point, if you ask me. 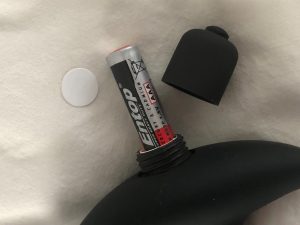 The package and the website mentions that the Raven Rocket has 10 vibration intensities, but I was only able to find two: on and off. Weird!

All in all the Raven Rocket is not at all as daunting as I first thought when I had only see its picture. The size is manageable and it feels really nice. It is quite easy to insert the head with just a little drop of lube. The bulbous part in the middle is a little bigger, and should be well lubed. It only takes a little effort to shove it in too. Then, the Raven Rocket stays in its place. This means you can use the Raven Rocket handsfree. 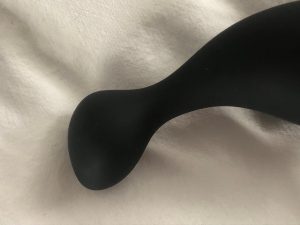 Because the control button is on top of the bullet that sticks out, it is easy to find and easy to control. The vibrations don’t disappoint and are felt clearly.The wider base also vibrates mildly to the perineum (that piece between your scrotum and the anus) and I liked that.

Personally, I felt the bulbous part better than the head. It has a nice feel of being filled, but not an obvious stimulation of the prostate.

How to choose a prostate stimulator in 10 easy steps