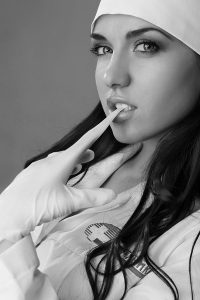 Almost everyone played doctor once in their life. maybe you stopped doing that as a child, of you may still be into that. Because when it comes to sexual role playing, doctors and nurses are a well loved theme and that has its reasons. Medical role playing is suitable for dominance and submissive roles and it has endless possibilities to be creative.

Everything is possible in medical role playing

When acting out a medical play, the examination is often an important part. You can use all your curiosity, which makes it great for both beginners and more advanced players.

In medical role playing, almost all scenarios are conceivable: a patient that is examined by a doctor, a nurse that takes care of a patient, a therapy session at a shrink, a nurse that is in a relationship with a doctor; just let your imagination run wild.

Such a role playing game is also great for experimenting with sex toys. That may or may not be sex toys that actually look like medical instruments. Which toys you want to apply, depends on the scenario you want to act out. For a simple examination, you might want to use different toys than for a full gynecologic fetish play, or a rectal exam. You can take it as far as you wish and even include enemas or electro stimulation. It al depends on how far your fantasy takes you. 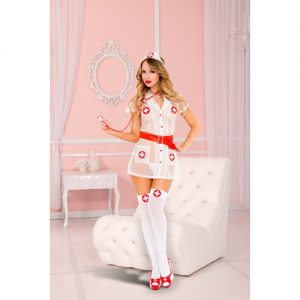 To make a medical role playing game really work, you can start with making the room where it will all take place a bit more medical. Make it look a little clean (or even sterile). Put in some props, like some brochures that you may have taken from the waiting room at the GP or the pharmacy.

If you have one, put a room divider up, where the ‘patient’ can take off his or her clothes en lay down some rubber or latex gloves.

You may also set the scene with clothing. There is a lot of  fetish clothing with a medical theme out there, that enables you to become into character with your role.

A major part of the medical play is the examination. Although you can do a lot with your hands alone, you might want to use some instruments, like a real doctor or nurse would.

Sometimes it is necessary to restrain the ‘patient’ with bondage tools. Some of the cuffs have a hospital theme and fit well in medical play. Wrist cuffs are always a good start, but you can take it to the next level, when your ‘patient’ is extremely dangerous or out of control. In that case you better be prepared and have a harness at hand. Just go as far as you like. Knock yourself out!

Some sex toys in the BDSM-corner of the shop, look like they just ran away from your local clinic. With a simpel mouth spreader for example, you can spread the mouth far open, allowing you unlimited access. As soon as the spreader is let loose, the cheeks will be kept apart and it will be impossible to close the mouth. This instrument is unbelievable simpel but effective.

And then there is the well known Wartenberg pinwheel, which fits well in a medical role playing game. Once invented by Robert Wartenberg (1887–1956) as a medical instrument to test nerve reactions, by letting the wheel run across the skin. Just let the wheel roll over the inner thighs, the belly, nipples and other body parts that ‘need to be examined closer’.

Electro sex-toys for example, are great for medical play. There is a huge amount of e-stim toys available to use in a play between doctor and patient. How far you want to go, depends only on your personal preference.

Further more you might want to consider cupping-sets or vaginal-pumps for vacume games. With a pumping mechanism, you are able to increase the sensitivity of nipples, clitoris or labia. Nipple or clit clamps also fit well into the game, where the doctor tests the reflexes of the ‘patient’.

The best way to store your sex toys

How to choose a prostate stimulator in 10 easy steps

Everything you always wanted to know (and more) about wand vibrators