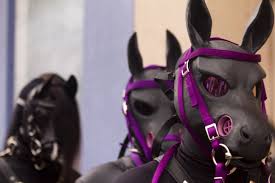 The history of Pony play

People have been dressing like animals for sexual pleasure, since living memory. In the ancient Rome, for instance, it is a well known fact that humans would dress up like animals of the equine species with sexual intend.

The Roman book Metamorphoses of Apuleius is about the magical and sexual adventures of Apuleius. This man wanted to transform into a bird, but when things went wrong he became a donkey. In this equine form, he lives a series of adventures that might well have been the first stories of pony play.

In the following centuries pony play is not often seen. There is the story of Aristoteles and Phyllis. Phyllis seduces Aristoteles and he must show his love for her by allowing her to ride his back (including a bit in his mouth). The origin of this story is questionable, because it was first written in the 14th century (over 1,000 years after it would have occurred). Nevertheless, pony play is sometimes still referred to as ‘Aristoteles perversity’. 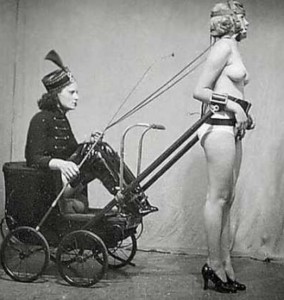 Stories of a woman that rides a man’s back can be found in all cultures. In a 1634 play entitled ‘The Late Lancashire Witches’ there is a scene that has some pony play elements. A woman rides the back of a man instead of a horse’s back:

Mrs Generous:…and must I then be controlled by him, and now by you? You are a saucy groom!
Robert: You may say your pleasure. (He turns from her)
Mrs Generous: No, sir, I’ll do my pleasure. (She bridles him)
Robert: Aw!
Mrs Generous: ‘Horse, horse, see thou be, And where I point thee carry me.’
Exeunt, [he] neighing”

As of the 18th century, there are more and more stories involving pony play. In the 1950s pony play is often depicted in SM magazine Bizarre Magazine and since 1987 there is even a magazine dedicated to this fetish, Equus Eroticus (not to be confused with Equus Magazine, that is a ‘normal’ horse magazine).

Slaves have literally been used as working horses. Black slaves used to be called names that were also used for dogs and horses until then. Slaves also got collars and bridles and were often castrated like would happen with cattle. Slaves used to get punished with whips and sometimes had to wear a bit in their mouth. But even in the British colonies humans were used as horse in the 18th and 19th century. In what is now known as Pakistan, generaal Sir Charles James Napier had prisoners pull his carriage.

With pony play there is at least one person that takes on the role of an equine, while the other is the rider or caretaker. The reason why someone wants to play the role of a horse may differ.

Pony play can be fun and sexy, but it is also a very expensive hobby that requires a lot of time and effort. In The Netherlands there are some mistresses that offer opportunities for pony play sessions, but there are no pony play events known to us. 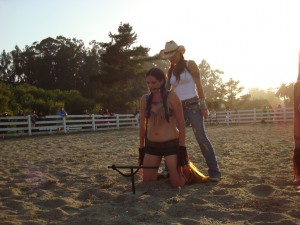 The trainer is the dominante person and that may be a woman or a man. In fact, gender is of little or no importance in pony play. Some trainers take on different roles (see below).

The trainer is supposed to spend a lot of time in his hobby. He takes on the responsibility to train the submissive to become a real ponyboy or ponygirl. That is not something you can become overnight. Ponies have to be taught different customs, like trotting, the way to dress up properly, equine behavior, etcetera.

Some trainers have more than one ponies. Some may even have an entire stable in which they train ponies of other owners. Trainers take their role really serious. Their goal is to deliver the perfect horse. Some trainers are specialized in a specific type of horse, like a stallion (for sex), a show horse, or a riding horse. 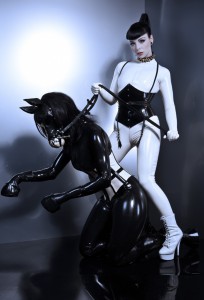 The owner is the dominant that is responsible for a specific pony. They will take care of feeding, equipment, clothing and showing of the pony. Ponies can be lend to other owners with the purpose of showing, ‘breading’ or racing. There is almost never exclusivity between pony, owner, trainer, rider or care taker (groomer).

Everyone that is allowed to do some horse back riding is a rider. Often the rider is not riding the horse itself, but a carriage that is being pulled by one or more ponies. 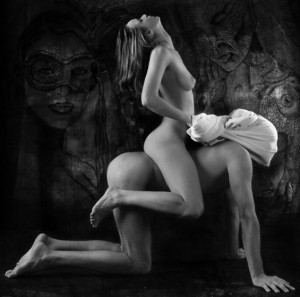 There are many different Ponyboys and ponygirls. With different roles comes different training. There are draft horses, riding horses, show horses, circus horses and breading horses.

A draft horse or pony is someone who is supposed to pull a carriage containing the rider. It takes a lot of physical strength and stamina. A draft pony or cart pony is sometimes dressed up like a horse, but not necessarily. Large carriages are sometimes pulled by multiple ponies.

A riding horse or pony must have the physical strength to carry someone on its back. Often it will be the trainer or the owner that will do the horse back riding. A riding horse can walk on either two or four ‘legs’. There are saddles available for both.

Show ponies need a certain attitude and charisma. They are trained to move in a certain way and need to be well groomed. Sometimes they act on shows where there are prices to win. Circus ponies are show ringmaster. The video below shows how the training takes place:

These types of horses are being mixed up all the time. A breading horse may well be a show pony.

Those that are the dominants, usually dress up in riding pants and riding boots with studs, gloves, a helmet and jacket. These attributes can easily be obtained in a regular store for horse riding gear. There are also specific shops where they make such outfits with rubber or latex. Horse riding whips and carriages complement this outfit.

For ponies there is a large variety in clothing and accessories, such as head gear with bit, gags,  butt plugs with tail, bridles, latex clothing, harnesses, masks, horse ears, eye caps, and boots (with hooves).