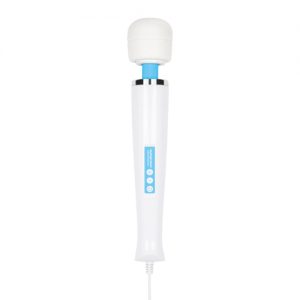 And then there was Betty Dodson. She was an activist in the age of sexual revolution, when sex toys weren’t that easy to come by. Dodson wrote a book in 1974, in which she praised the Hitachi as an unconventional way for a woman to achieve orgasms. From that moment on, the Hitachi was such a big success, it made the company decide to remove its brand name. The device was then sold as the Original Magic Wand in puritan US of A. In Europe there is a device called the Europe Magic Wand (although to me it is yet unclear whether it actually is the Hitachi under the hood).

Big successes get copied and that is exactly what happened with the Hitachi. In the early days, it was with varying degrees of success, but in the meantime there are magic wands available that are better then it’s predecessor.

The My Magic Wand

The My Magic Wand is also such a copy, brought to market by EasyToys/EDC (that gave me one for an honest review in return). When you would place the My Magic Wand next to the Europe Magic Wand, it reminds a little to those ‘spot the difference‘ images. they are hardly tell them apart. 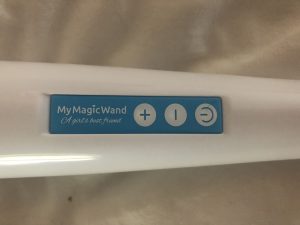 Still, there are some major differences. The My Magic Wand has a cord of 3.5 meter and that is more than a meter longer than that of the Europe. Is that of importance? Well, yeah! It gives you a larger range for motion. Further more, the My Magic Wand has three buttons (plus, minus and on/off) while the Europe only has two (just plus and minus). This means that you don’t have to press minus all the way back until it switches off; you can just press off when you’re done. Personally, I think this a major advantage.

In short, even though the My Magic Wand may be a ‘look-a-like’, it is not just a full copy, but a perfectly valid opponent. 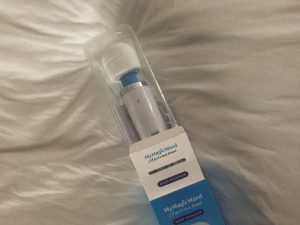 The My Magic Wand is delivered in a stir rectangle carton box with an almost clinical appearance. That makes it fit in the historical context of the Hitachi, that was not designed as a sex toy in the first place.

The box contains an inner package that holds the device. Next to the My Magic Wand, there is also a manual in the box (a two-pager per language, mostly containing warnings like ‘do not use near water’, which is kinda logical because it has a cord and needs to be plugged in). 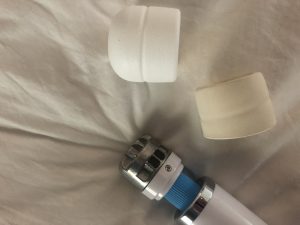 The My Magic Wand does not disappoint. It is nice and heavy: 772 gr., an ounce heavier then the Europe. The head is of a soft material and has a diameter of little under 6 cm. That head can be removed, by the way (something you won’t find in the manual). That may be of use when you want to attach adapters that won’t fit over the soft head. Once you remove the soft head, you will notice that the head consists of a metal head, a rubber sleeve and the white head. Tip: if you’ve removed the head and want to place it back, turn it inside-out and flip it back over the head.

Betty Dodson may have positioned the Hitachi as the Cadillac among vibrators, at the time. And it is, but at the same time it isn’t. It is much more then just that. And that certainly accounts for the My Magic Wand. Because not only women, but also men can enjoy the brutal and savage vibrations that the device is able to produce. It is a very versatile machine in all it’s simplicity. Yes, you can use it for straight forward stimulating of the clitoris or penis, but is also well fit for kinky play, like edging, or combined with bondage for ‘forced orgasms’. Due to the deep vibrations you can even use it over your clothes to achieve an orgasm. 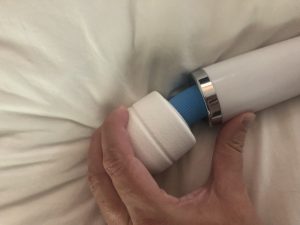 Only three speeds? I can hear you think that. That’s three less than the Europe and yet one more than the original Hitachi. The Doxy is even semi continuous (although secretly there are just six speeds).

The first and lowest speed of the My Magic Wand is already a deep savage vibration. We call this position ‘oemph’. For my partner (female) this position is already great. It gives deep rumbling vibrations, that makes it almost impossible not to come. Position 2 (position ‘WOW’) and 3 (position ‘HOHOHO’) are too much for her, most of the time. We’ve only used these on her through her clothes or after an entire night and we wanted to press out yet another orgasm. For me (male) positions 2 and 3 are good to endure.

The three patterns are programs that include all three speeds. So if positions 2 and 3 are too much for you, these patterns won’t do you any good.  But if you can or will take those intense vibrations, these patterns are a big plus compared to its competitors, the Europe and Doxy.

The pluses of the My Magic Wand:

The My Magic Wand is available in different colors at EasyToys and in our own shop.