As a child, my parents used to take me to a catholic church. I never enjoyed it. In fact, from the moment I really started to listen to the stories, my resistance started to grow. Especially the attitude of the catholic church towards women has always surprised me. It was later, much later, when I no longer considered myself te be part of any religion, that I discovered the story of Lilith.

The story of Lilith

Lilith is a demonic figure that first showed up in Babylonian writings, thousands years ago. The legend spread over Egypt, Greece, Syria, and she is mentioned in the bible only once, as a nocturnal creature  (Isaiah 34:14). But in Jewish traditions, the role of Lilith is further explained. According to these legends, Lilith was the first wife of Adam. If you are a little familiar with genesis, it will explain a lot. In Genesis 1:27, on the sixth day, God creates a man and a woman, without any hierarchical difference. But then, in Genesis 2: 21-23 suddenly Eve is created from Adam’s rib. Wait, what? Women were created twice?

No. According to Jewish legends, these are two separate events. Lilith was Adam’s first wife. But he couldn’t live with a woman who was equal to him. Lilith didn’t let herself be lectured by Adam. And because she didn’t agree with a submissive role, she left Eden. Three angels were send to get her and threatened to kill 100 children every day if she didn’t come back. But Lilith refused and that is why Eve was created from the rib of Adam. Adam was happy, but Lilith not so much.

In the centuries that followed, the story of Lilith is being elaborated. Some claim that she was the snake that seduced Eve to taste from the forbidden fruit. The fall of Eden was something like the ultimate revenge of an angry ex.

In the ninth or tenth century a series of legends appeared under the name ‘Wisdom of Jesus Sirach’ or ‘Alphabet of Ben Sira’. This tells the story of Adam commands Lilith to lay beneath him. But Lilith doesn’t agree to this. “You lie beneath me! We are both equal, because we are both created from dust.” It is clear that Lilith doesn’t like the missionary position, and prefers to be on top during sex. Adam feels superior however and doesn’t like it to have sex in different positions.

In medieval times, Lilith was often depicted as a demon. Lilith would have seduced Eve to have sex with adam while she was menstruating and thus while she was impure. After the fall of Eden, that Lilith caused by seducing Eve to taste from the forbidden fruit, Adam lived separated from Eve for 130 years. During that period, Lilith visited Adam in his sleep to have sex with him. They even got a child together. Also, when she first left Adam, she married the devil and gave birth to hundred demons every day. These demons were witches, that seduced men and strangled children. Lilith and Samael (the devil) became the dark opposites of Adam and Eve. Depending on which myths you read, Lilith would be the mother of all succubi (female demons that visit men in their sleep for sex) or also of all incubi (the male equivalent of the succubus).

Lilith is often depicted with a beautiful body and long red hair. Her tongue is sharp as a knife and her words as soft as oil. Her lips feel like roze petals, and as sweet as honey. No wonder men fell for her so easily. She would visit them in their sleep and satisfy them to fertilize herself on their nocturnal seamen. Man that had a wet dream, feared that they were visited by succubus Lilith and now had become the father of a devil’s child. 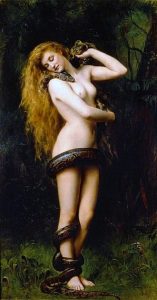 But in more ancient writings, Lilith was actually some sort of priestess of sexual rituals. The lily was the flower that represents her vagina; a source of fertility. But this is also a source of her life as succubus. She woud seduce men to come to a temple, to experience sexual freedom and worship. But this friendly version soon became something more awful. Female sexuality was demonized. Sex became something dangerous. Women were supposed to be submissive and every threat to the potency of men should be suppressed.

Although Lilith disappeared from the bible, the legend of Lilith accounts for a lot. She was seen as the cause of child mortality, which drove people to give newborns an amulet of three angels to protect them against Lilith. But she also became the symbol of a universal subject: the inequality between men and women in a male dominated society.

In 1972 an article was published named The Coming of Lilith, of theologian Judith Plaskow. That article highlighted her side of the story. She was not just some kind of wicked vixen, but a woman who revolted against the (sexual) dominance of men. That article was reason to see Lilith as a feminist icon. She is a strong, rebellious, woman that fights for equality and independence. Modern women have had enough of the (catholic) submissive image and battle for sexual emancipation.