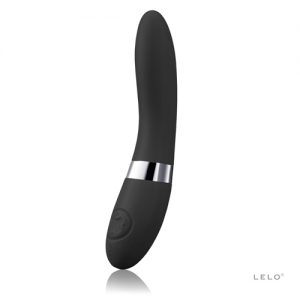 When EasyToys asked me what toy I would like to review, I didn’t hesitate for a second. The LELO Elise 2 was on my wish list for some time. I just hadn’t bought it because of – well – the investment.  So I was really excited when I received the Elise 2 in exchange for my honest review. Bottom line? This may well be our favorite toy for some time, if not forever.

All about the LELO Elise 2 says luxury. It is not LELO’s most recent model (the Elise 2 has been around since 2013), but it is one of their top models. LELO is well known to produce terrific products of exceptional quality and this one is no exception. The box was wrapped in the kind of paper that you might know from luxurious disposable napkins. You now, it looks and feels like cloth, but you can tear it easily. When you do, the Elise 2 will look at you from behind the windowpane. 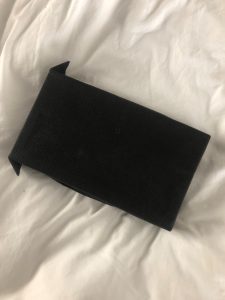 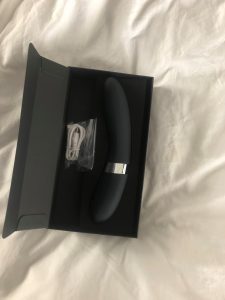 The LELO Elise 2 is delivered with a small USB-charging cable, a lube sample, a storage bag, a manual (in a very small font) and an activation code for the warranty. On many sites, it is still pictured with a charging adapter, but as far as I know it is now replaced by this lousy cable.

Get to know the LELO Elise 2 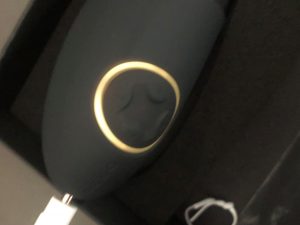 The Elise 2 is chargeable with the USB-cable. Once it is fully charged, you will be able to play with it for around 4 hours. The cable is really short (around 10 centimeter) and that is a bit disappointing. I don’t have a socket near my night stand, so it had to lay on the floor (on top of the storage bag) during charging. What also was slightly disappointing was that it was not charged when it arrived. Fortunately, we were able to experience what the Elise 2 was capable of, after only 5 minutes of charging. During charging, the control button lights up, which adds to the luxurious feel. After 2 hours of charging the Elise 2 is fully charged.

Every really good sex toy should be waterproof and this one is. Not only can you take it with you in bath or under the shower, but it makes cleaning also a breeze. 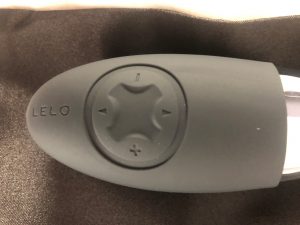 The LELO Elise 2 comes with a kind of joystick with which you can operate it. Basically it consists of four buttons: plus, minus, up and down. With these four buttons, you can control both motors. The plus and minus can be used to scroll through its nine speeds (plus is more intense and minus is less intense).

With the up and down buttons you can scroll through eight settings, or patterns. In every setting, you are able to adjust the intensity with the plus and minus buttons. Default both motors vibrate, and they are really powerful en yet very silent! When you push the up button only the lower motor vibrates. Push again and only the upper will vibrate. But here is where the LELO Elise 2 gets interesting. Because in the next setting, the lower and upper motor will vibrate in turns and in the next setting they do this faster. But the coolest setting is the next one. It will built t he vibrations from the lower to the upper half. It feels like the Elise 2 actually thrusts. And in the next position is will ‘thrust’ even faster. The last setting is one in which it does things completely random.

When you’ve reached the end of the cycle (both in case of settings as speed), pushing it again will not bring you to the beginning of the cycle. You will have to push the minus or down button to do so. Holding either of these buttons will skip you fast through the settings though and that is also the way to easily switch it off.

This way of controlling and the way you can liaise both engines is truly unique! There are toys around that can atually thrust (like the Stronic Drei, but that doesn’t actually vibrate; it just thrusts), but LELO has found a smart way to mimic that thrusting feeling.

You can use the LELO Elise 2 both externally (clitoris stimulation) as internally (vaginal/G-spot). For clitoral use, you better choose the setting that only lets the top vibrate, of course. Because you have nine speeds, there is always a speed taht fits your mood. The deep intense vibration made my partner orgasm on every use. 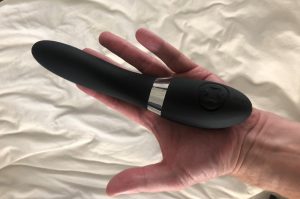 The way LELO Elise 2 let’s both engines to work together to mimic the thrusting feeling – I said it before – is truly unique invention. The vibrations go up and down the shaft, and it feels like it is actually thrusting. It does that so well, that it even feels like it is swelling in your hands. Normally, we don’t cater for vibrators with patterns (and that is why we don’t care much about the final setting with random vibrations). We just like constant vibrations better. But the wat the Elise 2 let’s both engines work together is different and is hardly a ‘pattern’. No vibrator we have ever used can induce such a arousing feeling!

The size of the LELO Elise 2 is also really pleasant. Not to thick and certainly not to thin. The curve of the shaft is not excessive, which makes it easy to reach the most sensitive areas, even at lower speeds. Further more it is nice and heavy, which handles real nice. The silky silicone ‘skin’ feels terrific.

The advantages of the LELO Elise 2:

The LELO Elise 2 is available at EasyToys or at our own online shop. It is not only available in black, but also in purple.