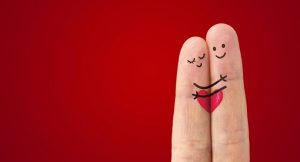 Monogamy is the norm in most relationships. We expect of our partner that they won’t cheat on us. That seems pretty straight forward, but nothing is further from the truth. Because it appears that almost nobody has the same definition of ‘monogamy’.

Monogamy literally means being ‘married to one person (monos = single, gamos = person). But the term is used in a wider context. It may mean that you marry only once in your life, or that you are married to one person at the time. In our modern society it also means having just one sexual partner. When someone has respectively one (sexual) partner at the time, it is sometimes referred to as serial monogamy. Polygamy is the opposite of monogamy. It relates to a situation where someone is married to multiple partners at the same time. When someone has a so called open relationship, and has multiple sexual partners with mutual agreement, we call it polyamory.

In an American research a number of students got a list of 27 behaviors that might constitute infidelity. This research also shows that there is no clarity on the definition of cheating.

If we have such different opinions on what monogamy is, it is very unwise to assume that our partners don’t cheat. What you think is cheating might differ from your partner’s definition.

That is why it is to be recommended to discuss what you expect from each other. What definitions do you agree upon? What is acceptable behavior and what are the boundaries? Also discuss that there are many different reasons to cheat and that some of those might actually have advantages for your relationship.

Six advantages of cheating for your relationship