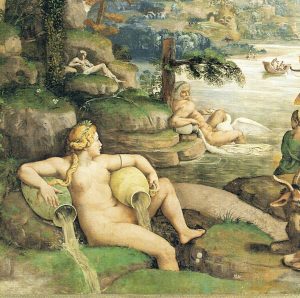 There are many warnings on the internet about the ingredient glycerine in personal lube. It could cause a yeast infection. But after intensive research we could not find any scientific proof for that. It appears that some blogs and websites are simply parroting each other on this point. That’s why the editors of NBRplaza asked our self the question: Is glycerine in lube harmful or not? We decided to go to the bottom of this.

Glycerol or glycerine is an organic compound. It is an alcohol that appears as a viscous colorless liquid with a sweet flavor. Typically a mixture of 80% glycerol and 20% water. It is generated by creating a reaction between vegetable or animal based fatty acids with ethanol. It is naturally occurring in the human body.

Because of its viscosity it is well suited to make liquids more thick. That is why it is often found in pharmaceutical forms to achieve a smoothing or softening effect, for example in coughing syrup or suppositories. Glycerol is used for fluid retention in cosmetics, such as toothpaste, mouth waters, shampoo, hand lotion and soap. In food it is also used as a sweetener, for example in margarine, candy or pastry (identifiable as E422).

One of the characteristics of glycerine is that it attracts and sustains moist. That is why it is often used in moisturizing creams, for skin, hair or facial care. When you put it on the skin, it will attract moist from the surrounding air to hydrate the skin. This process is called osmosis. Only when the air is (much) dryer than the skin or hair, it will have the opposite effect (it will divert moist from the skin to release it to the air). This is very rare, though.

Water based lube almost always contains glycerine, because it thickens the water. That is why it feels smooth and it works like some kind of cushion to reduce friction.

Still, you might wonder what happens if you use a lube with a high concentration of glycerine in the vagina. Could it be, that the glycerine attracts moist from the skin cells of the vagina wall? In theory, the cells would dehydrate and brake, making the vagina vulnerable for infections.

Ideally, a lube should have the same osmolality as the cells of the human body. In that case it wouldn’t work hydrating, nor would it absorb moist. That would mean that it should have an osmolality of  285-295 mOsm/kg4.  It is a well known fact that some substances, like ureum, enhances the osmolality. That is a good thing for moisturizing creams, because it will attract more moist from the air to pass to the skin.But would that do in the vagina? According to BadVibes, we should repel lubes with high osmolality. They base this on research that puts questionmarks on the safety of lube with a higher osmolality than the human body. Especially lube containing the petrochemical ingredient propylene glycol would have this effect. Only few lubes are tested on osmolality, though, so usually you would have no idea of the concentration of glycerine, let alone what kind of glycerine is used.

The effect of dehydration and damaging of the cells of the vagina wall has never been proven, though, neither is the causal relationship with an increased risk of (yeast) infections. It stays with ‘assumptions’ and ‘possible effects’. The only thing I have to offer, is that a friended medical analist regards it highly unlikely that this will be the case with commercially available lubes, because most will have a low level of glycerine. But even of those lubes that are known to have a high dose of glycerine (such as KY Jelly, the worlds most sold brand of lube), there is no evidence that a substantial percentage of its users caught a yeast infection after using it.

During a meeting of the UN in 1026, the topic was discussed. You can read al about it in this report of the UN. The UN also makes recommendations on osmolality in personal lube.

What is it? Is glycerine safe or not?

According to a European Cosmetics regulation (1223/2009/EG) and the Dutch Health Code (but also the FDA) a product may contain as much glycerol as needed. There is no maximum, because the chemical compound is not dangerous. But what about lube?

The Kinsey Institute for Research in Sex, Gender, and Reproduction, believes there is a lot of nonsense written about glycerine in lube. Most commercial lubricants contain glycerin and women rarely experience negative side effects of genital symptoms in connection with lubricant use.  “Sex itself – whether or not a woman uses lubricant – can increase the risk of a woman acquiring a urinary tract infection”, says Debby Herbenick of The Kinsey Institute. The advice is to pee after sex to ‘clean’ the urinary tract. In fact, if you often experience a UTI, lube may help you to stop that, because it has the effect to avoid the skin of getting irritated.

The reasoning for glycerine causing a yeast infection, is based on the sweet flavor and the fact that it is a sugar alcohol. The yeast that causes the infection feeds itself on sugar. Sounds logical, right? AstroGlide, a manufacturer of lube doesn’t think so. “Glycerin isn’t a sugar, it’s a sugar alcohol.Yeast and bacteria don’t feed on sugar alcohols, including glycerin. Glycerin can be converted to sugar by the body, but only through digestion — not when it’s simply applied in lube form. Ergo: glycerine is completely safe and will not cause a yeast infection“, according to AstroGlide.

Asha International, supplier of Beppy and Heroes lube, informs us, through our colleague Morgan that reactions on glycerine are extremely rare. “There is no unambiguous, conclusive, reproducible scientific justification, that glycerine in this composition and formula of a lube, is not safe for vaginal use. The dosis in Beppy Comfort gel is limited to a minimum. Those who claim the opposite, generally use a poor substantiation, not based on solild, extended scientific research.”

Head of R&D of United Consortium, manufacturer of System Jo, was also unable to find proof for a causal relationship between yeast infections and glycerine. He tells us by email: “One would think that if there was a direct causal effect between personal lubricants and yeast infections that the problem would be far more ubiquitous then is the case.“.

What does cause a yeast infection?

Vaginal yeast infections are caused by the candida bacteria, that are very common in the vagina, next to some other bacteria. Sometimes these bacteria suddenly multiply. This is often due to some changes in the vagina. Usually it has to do with a change in the acidity (pH value), temperature, sugar levels, hormonal shifts, or some kind of disturbance of the bacterial balance. This might be caused by:

In fact, the cause is usually totally unclear, or a combination of circumstances.

So I can’t get a yeast infection from using water based lube?

Well, not exactly. Some lubes contain up to as much as 10 different substances, like fragrances, coloring substances, flavoring, preservatives, and sometimes even sugar. Some of those might be the cause of a yeast infection. A deviating acidity (pH-value) of some lubes may cause problems.

Also, be aware that you might have contaminated your lube with bacteria, that may have been on your hands before you applied it. Always wash your hands, or wipe them to antiseptic tissues. For that reason, always use a lube from a reliable brand and with a decent dosing system (like a pump). It is also wise to avoid using a lube that has been open for more than three months. Bacteria may have come from your hands into the jar and multiplied in your lube. Consider that cosmetics and lube can go to waste. Always store your lube in a dry, cool, dark place (so that is not in your batch room).

Still in doubt? Use a glycerine free lube

The danger of contracting a yeast infection through glycerine is much smaller than through other causes. But if you are still in doubt, don’t take any risks, especially if you have a history of having yeast infections. Better safe than sorry. There are plenty lubes available that don’t contain glycerine or glycerol.

There are also great water based lubes that are free of glycerine and- perhaps more important- parabens or other preservatives. A great lube that is specially designed for women that are prone to infections is Pjur Woman Nude.

What to do if you contracted a yeast infection?

A vaginal yeast infection is not serious. Do you feel itches, white, yoghurt like vaginal secretion that is odorless, a red, or swollen mucous membrane of the vagina, or pain or a burning sensation during urinating or sex?It might be that you have a yeast infection.

Try to disturb the balance in the vaginal mucous membrane as little as possible. Try not to cleanse (your inner parts) with soap or lavage with tea tree oils or probiotica. Avoid having sex if the vagina is dry or irritated. A yeast infection can heal on its own, but we advise you to always see your GP.

We will update this article when there are new insights.

Make your own sex toy: fuck an orange