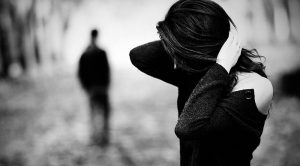 It’s been – let me see – 35 years when I met her. And it took me 20 years to tell this story. We were 14, both virgins. It wasn’t love at first sight. At least, not for me. I strongly underestimated my popularity with the girls in my class back then, something I later understood on one of the reunions where suddenly some of the girls admitted they have had a crush on me. But at the time she was a girl that I believed was ‘in my league’.

I stayed with her for about 15 years, 8 of those we lived together. Obviously, in those first 7 years we both lived at our parents’, but the longer our relationship lasted, the more I slept over at her place. Her parents agreed that we used the guest room and later, when they moved to a larger house, she got her own room and I slept in her bed even more often.

It was only after we broke up that I learned that my knowledge was blurred. The things I knew were a false representation. My girlfriend appeared to be far from average. And today, still, I strongly believe that things would have looked so much different if it wasn’t for him.

You see, I actually thought women didn’t like it when men played with their nipples. And I also thought that a girl’s period could last 10 days or even up to a fortnight. I know, how could I have believed that. I mistook her passiveness for frigidity. Some of the more ‘normal’ sexual acts were out of the question with her, where as some of the most kinkiest things seemed to be a daily routine. I didn’t see it then. How could I have known, what I know now. I just didn’t see the signs, that are so clear to me in retrospect.

As happens often with school friends, we grew apart. We got very different interests and at the end we just lived like brother and sister. Don’t get me wrong, we still were good friends, and at that time I thought that everything was normal. I even believed that what we had was something special. Until I fell in love with someone else. I didn’t know what happened. Never had I felt these feelings and suddenly I realized that I was with the wrong woman. So I broke up with my first love.

The breakup wasn’t anything I had anticipated. Of course there was drama, but this was different. She was devastated. Years of repressed trauma suddenly surfaced. During the first years of our relationship, during the time she was still living at her parents, it appeared that her father had abused her. All the things she didn’t want me to do, where the things that reminded her of the abuse. And all the lies she told me, were out of protection of herself.

I froze. Of course I really felt extremely sorry for her. I couldn’t begin to imagine what it must have been like for her. Not only during the years of the abuse, but also later on, when we lived together. When I thought that we were close friends, she had this giant secret that she couldn’t share with me. Not even with me.

We went to therapy, and that made me realize she wasn’t the only victim. There was only one solution and that was to start over. We separated and went our own way, much to her discontent.

Now, I am married to the woman I fell in love with. But still, those early years feel like a big loss. The prodigal decades of my adolescence. It shaped me, but in a totally fucked up way. It was like finding out you’ve always done things wrong and I had to hit my reset button. All, thanks to this man I now loathe. The man who thought that it was OK to take advantage of an innocent young girl, who also happened to be his own flesh and blood. And having a few daughters of my own, I despise him even more. Today, every time I listen to ‘Daughters’ of John Mayer, I can’t help but shed a tear.

9 thoughts on “He ruined everything – for Wicked Wednesday #293: The ex”