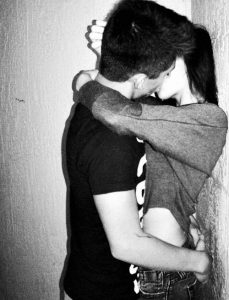 In ‘Fortunes’, Marc van Lier describes true stories of his sexual experiences through the years. Names and locations may have been altered to protect the privacy of personas.

Maybe we were 13. It could have been 14. Femke lived a few blocks away, in the same terraced house where Gerrit lived. They both used to be in my class on elementary school and now Gerrit was in my class at high school. Hormones were raging through our bodies.

Gerrit’s brother was a bit awkward. He was a bit older and collected sex magazines. When he was not at home, Gerrit and I sneaked into his room to read those. He had piles of those. Chick, Seventeen, Candy. We couldn’t believe what we saw.

When the weather was nice, we used to meet in the park, or at the gateway behind the row house where Gerrit and Femke lived. At the end of the gateway, there was a recess surrounded with bushes, where there was an iron dumpster. We used to sit there and hang out after dinner on hot summer nights and Femke joined us occasionally.

Femke liked kissing. She gave me my first French kiss. Not because we were in love, but just because it was nice. She was as curious to boys as we were to girls. I remember clearly how she sat between Gerrit and me on the lid of the dumpster. She kissed us in turns. Gerrit had taken her hand and placed it on his lap and I decided to do the same. Her fingers played with our erections, but no matter ow we tried, she wouldn’t go any further.

It seems like an eternity. The details have fainted. But I do recall that one night clearly. Gerrit was not around and Femke and I were kissing on that dumpster again, when she suggested to go into the bushes. They were dense and kept us hidden from the outside world. This time, she didn’t stop me when my hands opened her jeans and my hand slipped into her panties. I tried to remember what I have seen in the books of Gerrit’s brother and shoved my middle finger in her. Femke kept talking unflappable about her summer holiday with her sister and her parents. She remained indifferent by my decisive waggling. After about 10 minutes of purposeless moving in and out, we decided it was late and had to return home.

It took me a couple of years before I realized that it was not Femke, but me. At a biology class I first learned about the clitoris and not much later I understood how that was the holy grail to a girl’s joy. If only I had known then what I do know now.

Last year, Femke suddenly popped up in my Facebook. She was married now, had some children of her own and a job as a nurse. We shared some good memories, though.