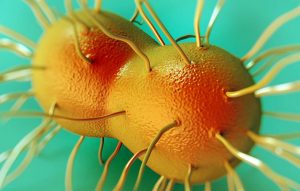 The UK Government reports that a man in the United Kingdom has caught the a sexual transmitted disease (STD) gonorrhea, that is resistent to the current first line treatment with antibiotics.  The WHO has warned about this ‘super gonorrhea’ for several years and that threat seems to have become real.

The UK man supposedly caught this resistent super gonorrhea during a trip in South East Asia earlier this year. He is the first Global case with this form. The first line treatment to treat gonorrhea normally exists of a combination of two antibiotics: azithromycin and ceftriaxone. The variant that this unfortunate man has, is resistent for both drugs.

In 2016 there were already reports of the rise of super STDs. The Centers for Disease Control and Prevention reported that year to have found a cluster of gonorrhea with a reduced response to ceftriaxone and that was highly resistent for azithromycin. Since then, there were reports of several cases with resistance for one of the two antibiotics. This UK case is the first case, with full resistance to both.

“If the current treatment with antibiotics does not work anymore, there is a great risk of a large outbreak of incurable gonorrhea”, said Jonathan Mermin (MD and director or the National Center for HIV/AIDS, Viral Hepatitis, STD, and TB Prevention). “This is especially alarming, because gonorrhea and chlamydia already take on epidemic proportions in de US.” There are signs that chlamydia also will become resistent for current treatments.

If you and your regular partner have done an STD-test, you don’t have an STD and you never have sex with others, you don’t have to use a condom to prevent an STD. It will be sufficient to use the pil for instance to prevent unwanted pregnancy. If you just caress, touch, kiss, cuddle, massage or have manual sex, it is considered safe sex too. To prevent being infected with an STD, it is recommended in all other cases to use a condom when you have sex (penis in vagina). You should also use a condom with sufficient lube when you are having anal sex (ass fucking). When you are having oral sex (blow job, pussy licking) it is recommended to use a dental dam or a condom.

Good quality Dental dams and condoms can be purchased easily and discrete in our shop.