Often it is said that the sexuality is predominantly focused on men, which leaves little room to get more insight in the female anatomy. Men would be unable to find the G-spot or the clitoris, and if they do, they hardly have a clue what to do with it. Nevertheless, the male sex organs still have some secrets for a lot of women. The frenulum praeputii for example. The what? Well, I rest my case. NBRplaza did the research. (It goes without saying that this article is NSFW – Not Safe For Work). 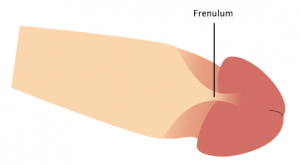 What is the Frenulum praeputii?

The frenulum is the triangle and the surrounding tissue that is located on the underside of the penis and below the glans. This spot is particularly reactive if it is touched or massaged softly and gently. It is the source of extreme sexual excitement. Different researches show that most men react very strong to stimulation of the glans, but especially of the frenulum. If you massage this triangular spot in the right way, it can cause an orgasm. Even men that suffered a spiral injury it is sometimes possible to get an orgasm by stimulating the frenulum.

The video below shows a compilation of frenulum massages.

How to involve the frenulum in love making

If your friend has a sensitive frenulum (chances are 100%), you can turn him on to extreme levels by stimulating the frenulum the right way. Use your imagination. No man is the same. Some men like light pressure and others like more extreme stimulation. That may even differ from day to day for the same person. Pay attention to his respons when you increase of decrease pressure. What makes him react the strongest to. Let’s make some suggestions:

Oral stimulation of the frenulum

Lengthy licking can cause a sore jaw. Try the following: Place the tip of your tongue at your upper lip and place the lower side of your tong against the frenulum. Now shake your head slowly against the longitudinal side of the penis (like when you shake your head ‘no’). This is less tiring for the tong and gives a great stimulation.

When you do take the penis in your mouth, press your tongue flat against the frenulum. Also in this position it is important to use your hand to stretch the skin. Use your other hand to touch his scrotum or the perineum (that bridge between his anus and his scrotum) or anus.

Sensual massage of the frenulum

A great way to turn a man on is by stimulating the frenulum with your fingers. Again, use your fantasy freely. Sit down between the legs of your partner. Tickle the sensitive triangle with the tip of your fingers or scratch it carefully with your nails. If he is turned on and has a strong erection, take his penis in your hand. Hold it tight with your entire hand, but now stick up your thumb and press the thumb against the frenulum and twist and turn it like you would hold a joystick and press the ‘action button’ on the top. Use lube to make it extra good. If you don’t have any lube at hand, be creative with baby oil, olive oil or massage oil. Lube with additives, like Durex Play Tingle will cause extra stimulation.

Vibrators for the frenulum

You may also use vibrating cock rings to stimulate his frenulum. Normally you would shove the cock ring to the bottom of the penis (against his belly), so it stimulates the clitoris and vagina during intercourse. But if you leave the cock ring around the glans, you can press the vibrating part against the frenulum for unparalleled sensation. This way, a cock ring can serve multiple goals: as a toy for solo sex, for you both during foreplay and during penetration.

And finally, there are also specific vibrators for stimulating the frenulum. The most famous is the Hot Octopuss Pulse III. This toy is great to use during masturbation, but can also be used together. Because the Pulse is folded around the penis, it is not necessary to have an erection to use it (as it is for most masturbators). You can just fold it around a flaccid penis and use the remote control. This makes it a great toy during foreplay. The Pulse has won several awards and is a truly unique toy. And it is fully waterproof (so you can also use it under the shower or in bath) and has five different positions.

Also from Hot Octopus, and especially for frenulum massage, is the JETT Guybrator. Due to its flexibility, you can wear the JETT around your glans as well as around the shaft of your penis. With its remote control you are completely free to pamper yourself with the different vibration modes! You can adjust the intensity completely to your liking. Also read our review of the JETT guybrator.

Where does foreplay stop, and sex begin?