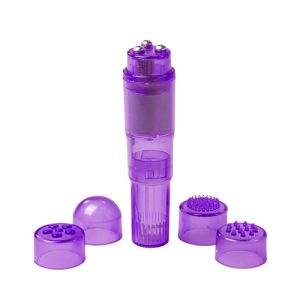 A mini vibrator is a great toy to have, because you can carry it around. The EasyToys Pocket Rocket is not much bigger than a lipstick, which makes it easy when you’re on the road, or at the office (please, don’t say you’ve never had the need for stress relief at work), or just in the bedroom. It is perfect for those two minutes before you go to sleep, or to start the day with a smile. And you can also use it during foreplay. The Pocket Rocket is meant for external use. You can stimulate your clitoris (if you have one of those) or the frenulum (that triangle beneath the glans, when you are the proud owner of a penis). 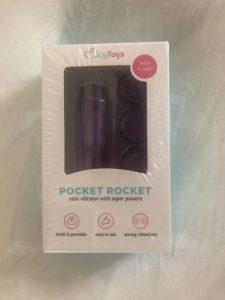 The EasyToys Pocket Rocket was made available by the sweet lady from EasyToys for this honest review. It was delivered in a neatly packaged box. According to the box, the Pocket Rocket is small and because of that also portable (check), easy to use and able to make strong vibrations. Well, we’ll see about that! [insert demonic laughter]

The EasyToys Pocket Rocket is delivered with four seperate heads. This differentiates it from Doc Johnson‘s original, that has only one head. On top of that, that one is four times as expensive. Pluses for the EasyToys!

That’s right. The Pocket Rocket only has two positions: on and off. This may sound barbaric, but I’ll just repeat the word ‘snack’. Sometimes it is all you need.

The Pocket Rocket is made of ABS (hard plastic) and for most mini vibrators that is a good thing, because it resonates the vibrations best. Don’t take your Pocket Rocket under the shower or in your bath, because it is water resistant, but not water proof.

I’ve owned this type of mini vibrators before, so I had a pretty good idea of what to expect. I thought. I (male) tested it alone and together with my partner (female).

First of all you’ll need to place one battery. Unfortunately, that is not what Japanese folks like to call ‘poka yoke’ (monkey proof), but by jiggling it around, it was a piece of cake.

The vibrations of the EasyToys Pocket Rocket aren’t all that bad. Just don’t expect a deep growling buzz, but more of a clearly strong vibration. For stimulating the most sensitive spots mentioned above, it is more than enough to make you cum. And with the four different heads you can adjust the stimulation a bit. The smooth head is great for sliding (tip: use some lube). The other three heads have little knobs. The more knobs, the more ‘stingy’ sensation. That is great when you enjoy a more pressure-like movement. The differences aren’t earth-shattering, but it can be the difference that takes you over the edge.

The pluses of the EasyToys Pocket Rocket:

The EasyToys Pocket Rocket is available in purple (the one we tested), pink and it used to be available in blue (but that one was out of stock when I wrote this).

There are some things you just have to have. And a Pocket Rocket is one of those. OK, it is not a steak, no super-the-luxe Mercedes-among-sex-toys, no thousands of vibration patterns, no smartphone controlle, and no hyper-modern material. But it is just plain small, simple, great and effective fun.

The EasyToys Pocket Rocket is available at EasyToys or in our own shop.