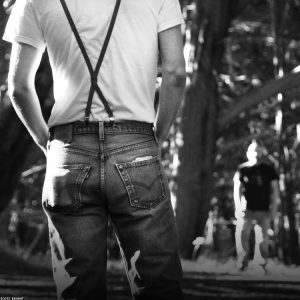 Cruisen is walking or driving around, in search for anonymous, casual and one-time-only sex. Men (especially men) do so for probably as long as living memory. The way in which they do has changed. Several years ago you had to go to specific locations, that were infamous for their opportunities to pick up sex material. Now, cruising has been replaced by apps. Or has it?

Cruising as a code name

At least since the 1970s the term ‘cruising’ is used as some kind of code name mainly between homosexual men. That way they could let insiders know they were into certain sexual acts, leaving homophobic heteros in the dark. Meanwhile, the term is more widely spread and homosexuality is more accepted. The need for a code name is less necessary. The term cruising is so entrenched that it is still being used.

Yet, the activity of cruising is much older than that. Even in the 18th century men looked for sexual contacts with other men in dark alleys and parks. That appears from literature and poems from that period.

Research shows that men that frequently cruise, often do not identify as gay or bisexual. Often they are closeted men that are married. Particularly those men are not looking for a long term relationship, and they do not want to be seen in gay bars or make an account on a gay dating web site. Especially those men are just looking for causal anonymous sex.

Traditionally there are certain locations that are well known for contacts between like-minded individuals. Well known are gay bushes, parkings, bars and clubs with darkrooms and glory holes, saunas, public restrooms and sex shops with cinema cabines.

Although cruising originates fro the gay scene, heteros started to use it as well. Hetero men use the term ‘cruising for chicks’ more as one to describe the act of picking up women for casual sex. The main difference is that they do it in public nightlife and it is far from anonymous. 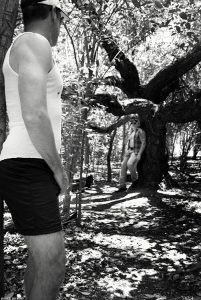 Cruising in times of Grindr

Of course there are large amounts of people that use apps to meet others for sex. Still, it;s like shopping online with these apps, as opposed to shopping in physical stores.Yes, with an app you can first browse before you decide to buy online. But you will get it the next day at the earliest. So if you want instant gratification, you will go to a physical store. As is the case with cruising. Especially outside the urban areas it is often much quicker to go to one of the infamous gay meeting places if you want the cock.

Not only is it faster, cruising comes with an adrenaline kick. It;s exciting to wander around in anticipation of casual sex. Everybody that ever visited one of these gay meeting places can tell you the strangest things happen. Men walking around in sexual (fetish) clothing, half naked, tied up to a tree, … all in semi public places.  But even in darkrooms and with gloryholes it is a kick not knowing who you actually have sex with. No app can beat that thrill. The oppression of and violence against gays has caused the impudence, rebellion, and need for unrestrained submission to sex. For some it might even be addicting.

An other thing with apps is that a date usually is preceded with sexting, in which participants drive each other crazy with raunchy promises of sex acts. When it comes to a real encounter, it us usually disappointing. The messages may have seem hot, but they often can not live up to that. With cruising you get what you see, or at least you get whatever it is you need.

An important part of cruising is the browsing itself. The tension of just looking around, the escapism and the anticipation. Even though you will not get some, at least it is exciting.