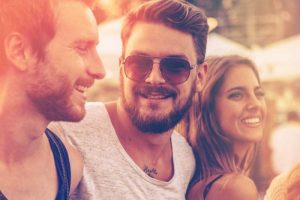 Bisexuality is less accepted and bisexuals are not taken seriously. That is the conclusion of Dutch Jantine van Lisdonk in her promotional research at the Vrije Universiteit of Amsterdam. Van Lisdonk held an online survey among 1636 young adults, in the age of 16 to 25 that are attracted to both genders r the same gender. She had an interview with 38 of them.

Bisexuals struggle with their orientation

Bisexual young adults struggle more with their sexual orientation than gay or lesbian persons of the same age. “They feel less accepted by their parents or others in their proximity. Bisexuality is not seen as a true sexual orientation, even by homosexual people”, Van Lisdonk says to the Dutch NOS.

There are many prejudices about bisexuality. It is often seen as homosexuality in disguise (you just don’t dare to choose, or as promiscuous behavior (you just want to have a lot of sex, with many different partners). often, it is believed that bisexuals are unfaithful. If a bisexual has a relation with someone of the opposite sex, the general idea is that they secretly desire for someone of the same sex.  Bisexuality is seen as a phase, or an experiment: “At the end of the day, you will have to make a choice”.

Due to these prejudices, bisexual adults are more often less open about their orientation than gay or lesbian people of the same age.

Bisexuality is one of the most misunderstood sexual preferences, with a long list of myths and stereotypes. That’s why it may be good to see what science says about bisexuality. That is not only informative, but it may contribute to a better understanding and less misconceptions.

Bisexuality is a sexual orientation

Many people may think that bisexuality is a hidden form of homosexuality. Those people say that someone who identifies as bi, is in fact homosexual, but is afraid to come out of the closet. Scientific research shows however, that the sexual preference and interests of bisexuals, strongly differentiates from homosexuals. In one of those studies participants were asked to look at photos of men and women. The researchers took time of how long the respondents looked at each photo. The result was that bisexuals look equally long at photos of men and women, whereas gay and lesbian persons look much longer at photos of persons of the same gender. Another study showed that bisexual men become physically aroused from both genders, whereas gay men only get physically aroused from other men.

Bisexuality is not a phase

A common misconception is that bisexuality is just a phase. Het would, according to some, be just an experiment. Something you try at college. It is always good to experiment and to explore tour boundaries, but to say that bisexuality is ‘just’ a phase is pure nonsense. Research shows that women who identified as bisexual as young adult, still do at older age. Only 8% say at a later stage that they changed their preference. The rest is still attracted to both men and women.

There have been several studies (most conducted in the USA) that show that women identify themselves as bisexuals more often than men. According to the National Survey of Sexual Health and Behavior, 2,6% of men and 3,6% of women in the USA identify as bisexual. Other research shows a much bigger difference. You could argue that bisexuality is more accepted for women than for men. There are also studies that claim that women have a greater erotic elasticity (read: getting turned on by many things). But on the other side it is a well known fact that the physical arousal of women does not always corresponds with their mental arousal. That is called arousal non-concordance. For instance, women may get physically turned on by watching two monkeys have sex, but that doesn’t make them lovers of bestiality.

It is striking though that in recent years, more women are openly bisexual. That doesn’t mean the occurrence of bisexuality among women has increased, but it does mean it is more accepted.

Prejudice from all sides

Prejudice against bisexuals doesn’t just come from heterosexuals. Gay and lesbian people also have their fair share of preconceived ideas. There are many presumptions, especially about bisexual men. The stereotype is that bisexual men are just confused about their sexual orientation or just have a big sex drive. This biphobia or binegativity is not just coming from heterosexuals, but also from gays and lesbians. As an example, the willingness of both hetero as homosexual persons to engage in a relationship with a bisexual is relatively low.

Bisexuals are not equally attracted to men and women

Bisexuals are as faithful as others

Many people strongly believe that it is almost impossible to fulfill the needs of a bisexual partner. Sooner or later, so they think, they must feel the desire to do ‘something’ with someone of the other sex than the current partner’s. That is why the expectation is that bisexual partners will cheat more often than people of other orientations. The reality is that many bisexuals are in a monogamous relationship. From 10 year long research it appeared that 89% of bisexual women are in a monogamous relationship. Bisexual women that do want to have sex with persons of both genders, do so from within an open relationship and not by cheating on their partner behind their back. There is no evidence that we know of, that bisexuals are less faithful then people from other orientations.