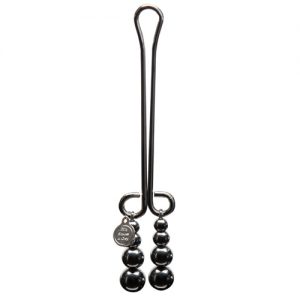 “Holy cow, the feeling is exquisite, raw, painful, pleasurable… Oh – the pinch.” – is what Anastasia Steele said in Fifty Shades Darker. She was talking about the feeling she got from a clit clamp. But what is a clit clamp actually? How do you use such a device and is it painful or nice? Right when you think “nah, that’s not for me”, I recommend you to read on.

A cilt clamp: what is it good for?

Did you know that a clitoris has over 8,000 nerve endings? Maybe you did. But did you also know that these nerve endings are based on the side of the external part of the clitoris? A clit clamp does to your clitoris what a cock ring does for a penis: it ensures that the blood supply, that makes the clitoris swell, is blocked. As a result, the swelling will last longer and your clit will be more sensitive. Each touch will be more intense.

A clit clamp is above all pleasurable for women with a smaller clit that needs some extra stimulation to reach an orgasm.

You can wear a clit clamp during foreplay. It is just as good a sex toy as a piece of jewelry. To that extend, it can be compared with a nipple clamp.

How to use a clit clamp?

It’s best to use a little lube (it gets even better with for instance Durex Intense). If you attach the clamp to your ear lobe or fingertip, you get an impression of the pressure. Probably, your clit is less thick than your fingertip, so the pressure down there will be much less intense.

You might use a mirror to position the clamp, but if you are slightly familiar with your genitals, that won’t be necessary. The first time it might be a bit frightening, to place a clamp on your most sensitive area. You will notice that once you have put your hesitations aside, it will feel like light pressure.

But, before you can place the clamp, you have to make sure your clit is swollen. If that is not the case, it is almost impossible to place the clamp. Try using some stimulating lube.

It is important that you don’t wear the clamp too long. For a beginner, 10 minutes at a time might be long enough. You are blocking the blood supply, remember, and that is something you don’t want to do for too long, or you might have an opposite effect (your clit might get temporarily numb). Remove the clamp after 10 minutes, let the blood supply get going and then replace it (which in itself is a nice game).  When you remove the clamp, you might feel a tingling sensation in your clit.

Clit clamps are not meant to cause pain. They should apply gentle pressure to the sides of your clit.

Your clit is supposed to sit at the top, where the clamp is slightly more spacious and round. The longer rods are meant to sit between the smaller labia. That is why these kind of clamps can hardly be used during penetration. They can be great during foreplay, or with oral stimulation.

Some nipple clamps are great to be used as a clit clamp. Use a nipple clamp with adjustable pressure, like these clamps. Your labia will not be in between, so you can wear these during penetration.

In fact, all nipple clamps can be used as clit clamp, bu the best ones are those with silicone finishing on the beak that will be placed on the clit,  like this set of nipple and clit clamps with chain.

The Fifty Shades Darker clit clamp (see photo above) is made of metal. This makes it easy to clean under the tap. It weighs about 15 grams. You can pull the clamp apart to place it over your clitoris.

The FSD clamp has minuscule weights that you can feel when you move around (without pants). That will give a light sensation as if someone gently rubs your clit.

The clamp is only €12,95 and is part of the Fifty Shades Darker, Official Pleasure Collection, that has officially been approved by E.L. James, the author of the series. In our shop we sell several clamps.

The complete guide to buying your first sex toy:

How to choose the right rope for bondage

Where does foreplay stop, and sex begin?

Why you should always go for 100% waterproof sex toys