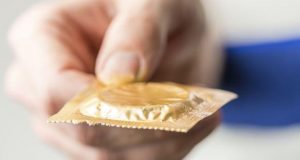 There comes a time in every relationship, or with every date, that you will get undressed for some serious hot sex. The well seasoned person will take out a condom without hesitation. But the less experienced dater may ask you if you perhaps have a condom at hand. And than there are the careless that just go right to their target and you might have to slow them down to ask them if they aren’t forgetting something.

Condoms are always a good idea, if you aren’t yet in a long term relationship with someone. They help you prevent unwanted pregnancies and can protect you against sexual transmitted diseases and infections. Still, condoms aren’t without risks. That’s why we sum up the 6 most common problems with condoms and we gve you some tips on how to deal with them. 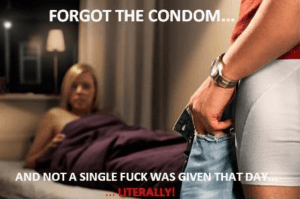 It is kind of a thingy when you start dating: should you, or should you not take a condom with you? If you have one, you might give the signal that sex was all you where up for and that may not be the image you want. But if you haven’t got one on you, you might seem a little naive.

On top of that, some women still wrongly believe that it is a man’s duty to bring the rubber. He has the dick, so he better caries something to wrap it up with.

If you start dating, you look nice, there is a chance – no matter how small – that you meet someone to have sex with, dan you make sure you have condoms (plural) on you. Whether you’re a man or a woman. Basta!

If you do wind up in a situation where for one reason or another, you don’t have any condoms on you, but you do want to have sex, here’s some options:

You may of course also consider having unprotected sex. Maybe you are on the pil and your bed partner looks healthy. But do realize that most STDs are invisible and you can also get an STD from oral sex. Are you sure you want to run the risk of getting herpes or HIV from this date?

As a general rule, the shelf life of condoms is five years from production date. Everyone carrying a condom that has expired, must have had protected sex longer than five years ago. Whatever reason the owner of said condom has, there is no excuse.

So, always check the EXP date. If you have forgotten to do so, you can sometimes just feel that the condom is past its expiration. The rubber may feel dry, or just weird and sticky and maybe even a little fragile. The chance that a dried out condom breaks is huge. So, make sure you check you have condoms on you before you go on a date and check if those condoms are still way before the expiration date.

A common mistake is that men use a condom that just doesn’t fit. Unlike popular belief, condoms aren’t for every size. A condom that is too small kan rupture and one that is too large can slide off. Most condoms are made for the average penis size. That is why it is important to know what the size of your penis actually is. Your choice of condoms, depends less on the length but more of the girth. Most condoms show their ‘nominal size’ (which is the diameter when is is flat on the table). Most condoms have a nominal size of between 52 and 56 mm. Tighter condoms are between 46 and 49 mm and larger ones start from 57 mm. There are also brands that have their own condom size indicator, which makes it easier to determine your size.

When you are a woman and you carry condoms on you, just take condoms of the average size. Should your friend have an exceptional penis size than you A) have to trust that he brings his own, or B) you have to go to alternative ways of having sex (like manual). 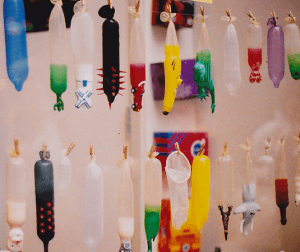 It seems fun, a condom with strange shapes and colors, ridges and protrusions. But a vagina is not designed for penetration by a cactus or a rabbit with whiskers and big ears. Also, most fun condoms do not protect against unwanted pregnancy or STDs. There just there for the fun.

So, no, a fun condom isn’t funny (unless it is a present and you are sure the one you’re giving it to will not try to use it), and no, fun condoms are not pleasant for the receiving party, and no not all fun condoms are safe.

Do yourself a favor: Just buy yourself some reliable condoms.

There are three reasons why condoms slide off:

Whenever a condom has slipped off, there is a chance that sperm leaked into the vagina, anus or mouth. When sperm could have entered the vagina and you are not using any other contraceptive (like the pil) there is a chance of pregnancy. Go to your pharmacist (within 48 hours) to get a morning after pil. If you are not sure your partner was free of STDs, get yourself tested.

Condoms that are used correctly hardly ever break. When condoms are tested in a lab, less than 10 in 1000 condoms (less than 1%) break. Unfortunately, sex people have is not comparable to those lab environments. Condoms tear for many different reasons: it was too small, there was air in the reservoir, it was used too long, there was not enough lube, two condoms were used on top of each other, the wrong lube was used (silicone or oil based in stead of water based), the package was opened incorrectly, it was passed its expiration date, the condom was stretched in stead of rolled off, the reservoir was pulled over the glans, … Most issues with ruptures are due to incorrect use and not by manufacturing defects.

To prevent rupture it is really important to use condoms in the proper way. Make sure you have enough space on top (squeeze the reservoir between thumb and index finger, before you place it on the glans and roll it off). Never stretch or blow up the condom.  Always take a new one if you have and never r. If you have had sex with a condom for longer than 10-15 minutes, change it for a new one. Apply some water based lube every now and then.

The risks for a ruptured condom are the same as with one that slid off.

Want to buy condoms? Check out our shop.

Is oral sex safe or an underestimated risk?