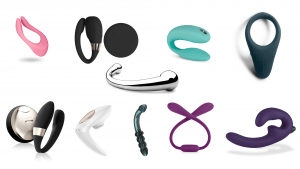 Sex is great. Sex with a partner is even better. But sex with a partner and a sex toy is perhaps the best. That is, if you have the right tools at hand. All sex toys can be used together with your partner, of course, but some have been especially designed for this purpose.

Why use a sex toy, when you have each other?

A defense that is often heard when it comes to sex toys, is: ‘we don’t need that, because we have each other and we don’t need nothing else’. Now, that may be true, but it so happens you use a lot of things in daily life that you don’t actually need. They just make life a lot more pleasant. Let’s face it: do you really need that potato peeler, or that kitchen blender? DO you remember there used to be a life without smartphones?

Many people can use some extra stimulation to get more aroused, or to even reach an orgasm. Sex toys are capable of doing things a human body is incapable of (like vibrating really hard and fast). Just like your cream gets whiped faster and better with a machine than with a whisk, a clitoris can’t do without some extra stimulation.

And that’s why we have 10 of the best sex toys listed below, that are most effective when you use them together with a partner.

At first, the We Vibe Sync looks similar to its predecessors. You ar supposed to ‘wear’ the We Vibe when you are fucking, so its vibrations and texture stimulates both parties. The internal arm vibrates against the G-spot and penis and the external arm (that has its own motor) vibrates against the clitoris and labia. The We Vibe Sync is bendable in two places (each little arm has a bending point), so you can make it fit your body better.

Satisfyer is notorious for copying everyone else’s ideas. But in this case they have combined some of those ideas from others to a very original and interesting new concept.

It has 10 speeds, to vary the vibrations and air pressure separately. Oh, and you can also use it solo, if you like.

The Tiani 2 from LELO, is worn inside of the vagina, but both partners experience extra stimulation.

The Tiani 2 is made of soft, flexible silicone and has 8 different vibration speeds. It is also 100% waterproof . The Liani shipes with interchangeable ‘arms’ the part that goes into the vagina).

You can wear the Satisfyer Partner Multifun 2 around the penis and it will work as a vibrating cock ring. But it can also be used like the other U-shaped couples vibrators: with one arm in the vagina. Anyway, let your fantasy do the work.

It has 3 motors that can be operated separately (10 speeds) so you can decide which part you want to vibrate in what speed. The Partner Multifun is rechargeable with a magnetic cable. This toy is 100% waterproof.

Well, I am very sorry. Of course the LELO Tiani 2 is a great device that has won several prices. But there is a newer and improved version that is even better.

The improved vibrations are more powerful and give well-targeted vibrations to the clitoris, while the flexible silicone design gives ultimate pleasure and comfort.

Because it is waterproof, rechargeable and has a remote control, the Tiani 3 from LELO is THE design to come to mutual simultaneous orgasms.

The We Vibe Verge is a multi-functional cock ring. Basically, you can use it in two different ways.

First, you can place it around the scrotum of the man and then around the (flaccid) penis. The point then has to point down. It will stimulate his perineum during sex.

But it can also be worn the other way around. The point will then point upwards and it will stimulate the clitoris of the partner.

So, it goes without saying that this is a very versatile device that can be used both solo and together with your partner, no mater what gender you are.

This Sharevibe from Fun Factory is aimed at female-female and male-female couples.

The short end goes into the vagina. Then it acts like a strap-on that also stimulates the person who wears it.

Volg me
Jennifer
Old enough to know better, young enough to give a damn.

Volg me
Latest posts by Jennifer (see all)